Click the link above to be directed to Dr. Lori Hunt..our kennel veterinarian who has been recognized for her great accomplishments in Ohio for fighting for dog owners rights and supporting The Sporting Dog Alliance…Thank You Dr. Hunt!!! (To see her recognition scroll down the article for the bold print in the Ohio section.)

Last night we ran both the jumpers and the standard courses. Normally we don't have enough time to do both but I guess my class is getting advanced enough that running full courses gives us more time.

Bernie did ok on the jumpers. She ran off a few times on me and got really sniffy in this one spot. I had to do all sorts of things to gain her attention again. At one point I was jumping up and down to get her to look at me and it worked. Maren laughed and said that was really good… Continue

Nothing much to say...I just found this image on Photobucket and wanted to share it! 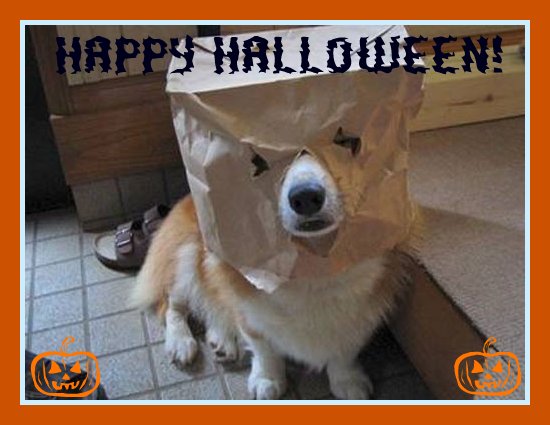 Well we learned one thing.. don't let your dog loose when you have people over:

Damage report from tonight-
1 - Journal
2 - Rubber ring around dog bowl/dog bowl. Most of pieces were found except one *TINY* piece.. probably in towel or someone's belly. Talked to neighbors about potential issue, showed the bowl and they said Owen is likely okay. Seriously small piece but ring is toast in many pieces (put it back together to see what was missing).
3 - my sanity after… Continue

kaijuu extremely scared of the CLICKER

i recently decided that i wanted to train him with clickers because he is only treat driven .. so i figured operant conditioning will work ...

i clicked it. and he got so scared. and basically i tried to do give him treats and everything after every click with a command, sorta worked until he started to run away from me!

he finally wanted to go outside, and ZIPPED outside. and i find him on the side of the garage side door. i call for him and he won't come to me… Continue

New Intern and function on the site!

So yesterday we went and picked up our new "Intern", his name is Albert, a 4 year old sweet heart who just surrendered to Sunshine Corgi Rescue.

Albert is settling in and currently working as Silvia's personal assistant. As soon as his evaluation period is over, he'll be transferring to his new forever home :) Folks, be a hero and volunteer! Your local rescue groups needs you :) In the coming weeks we will announce our new rescue… Continue

I can't believe that my little corgi is one years old. We had a fun time giving her some extra treats some new toys and then frapping in the yard. but i think she will be a puppy for a while longer, what with the total disgregard for commands sometimes, and her constant need to be awake and moving.

anyway not much else to say about her, other that i am so happy we decided last year to get the little ball of fluff.

Fern will be having surgery

Our little rescue Fern made a two day visit to the vet for some testing. Fern is our little Pem rescue. She is three years old and was in Foster care for more than six months. She has an incontinence problem. Nobody wanted a leaky Corgi I guess. We fell in love with her regardless. We welcomed her to her forever home in August. We have tried a variety of teatment therapies, PPA, DES--a combination of both as well as changing her to a grain free diet and supplementing her with corn silk. These… Continue

Well, it has been about 5 months since we adopted Butter (9 year old Cardigan). Some of you may remember how I wrote in, wondering why he never made a sound. Many advised me to be thankful. However, it just didn't seem right. He came perfectly trained, like a little soldier or gentleman. He never made a sound.

At this point, my husband and I are pretty sure that he was prohibited from barking or making any sound where he was before. In fact, the previous owner told me she used high… Continue

Elvis the corgi innately uses calculus to calculate to catch his favorite toy!

Check out this interesting CNN story about a Beloit math prof teaching calculus to his students using his corig, Elvis!

First- thank you for your concern and ideas with what happened to Sunny yesterday. I will be taking this up with a "higher" authority since it seems like Animal Control isn't doing anything. Thankfully it doesn't seem to have affected his potty training- he went right to the door and sat down when he has had to go potty today! Yippee!!
Sunny had his first puppy kindergarten today and it went really well. He is about a week older then they usually let in, so he was the oldest there. They… Continue

Well the girls went to a corgi social at the Alimagnet Dog Park in Burnsville today. They ran and romped and played for close to two hours. This included a goodly amount of romping in the mud and algae near the edge of the lake. There had to be close to 20 corgis there and it was simply awesome to see so many corgis plays together. There was even a cardigan in the bunch and Ziggy (said cardigan) was a handsome fellow with tons of playful energy.

Leon is doing peachy. As peachy as the little dork can be anyway. :) He's decided he hates car wipers and loves sticking his head out the window. What is it with dogs and windows? Whatever. He always looks so blissful and happy. I've made jokes to my mom that he needs a little side car so that he won't try and wiggle himself all the way out of the window when she's driving. She thinks he needs a little red baron hat. I only let him get about half-way, and that's on the slower ends of the trips… Continue

Had a frustrating day today. My puppy Sunny (who is rather shy when it comes to other dogs he doesn't know) got attacked by my neighbors dog who had gotten off her line. Sunny was going potty and here comes the dog right on top of him. My daughter got her off Sunny before Sunny had a chance to be hurt- he was just terrified. I've never heard a dog make the noise he made- it was like a scream. We deal with this all the time (their agressive dogs getting off their lines) and it seems like there… Continue

Tommorow marks the one-week anniversary of Gonzo's life with me. Him and Moses play hysterically, as Moses jumps on top of the pet carrier, swatting at Gonzo (he's declawed, no worries!) and Gonzo jumping up and down...ah, I feel like a mother, haha. Gonzo is so outgoing, I had a small party this week and he just pranced about, as people couldn't resist picking him up, talking to him, protecting him from every little thing (and Gonzo tried to prove he wasn't so… Continue 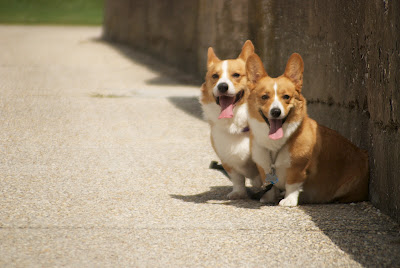 So if you have been wondering why our presence have been minimal for the last month, that's because we were on a month long "workation". Silvia, the dogs and our film crew were on the road shooting commercials in FL, GA, SC, NC, VA, MD, DC, NJ and NYC. 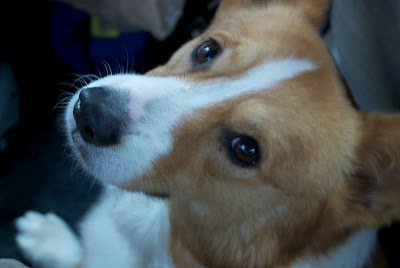 We travel a lot and have… Continue

Was wondering if anyone else has had this problem. Harley has found the drop wire to our phone and has pulled it out 3 times in one week. I know the wire did droop a little and I asked the phone co to secure it better to the the house, but they did not. The last time he did this I ended up moving the wire so it would be under the window and zipped tied it to the cable tv wire and twisted it around it and then they (phone co) put the wire back. He found the wire again this morning, but did not… Continue

So, they are still in those love-hate relationship! However, Charlie became bigger, and now he plays rough games with Marusa (my cat) and chases her everywhere. As a revenge, she likes to sleep in his crate whenever it's left open.

So, here is the story.

Charlie intended to sleep in his crate, but when he got there, Marusa was already in! 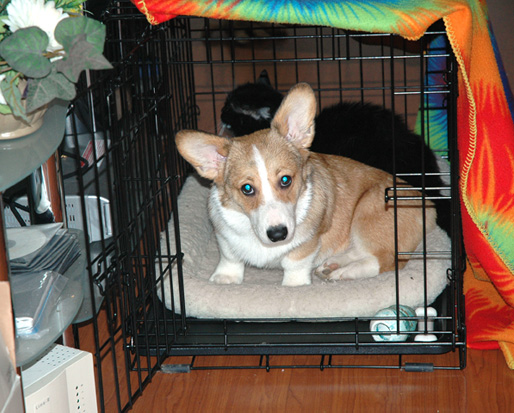 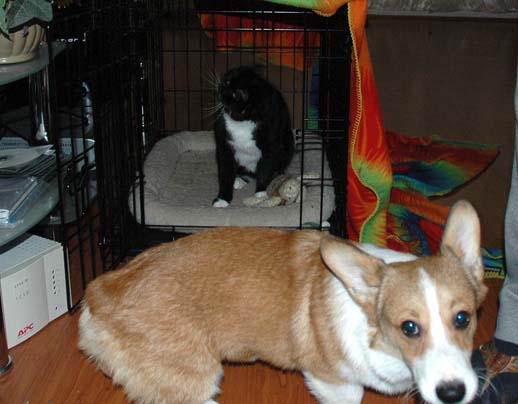 Hi to all corgi lovers!!

I have just started my own blog where I will be posting things that interest me and things that I love. Of course, corgis will be a big part of my blog, and alot of other things regarding design too.

I am inviting all my fellow corgi owners to view my blog and hopefully to get some followers of my blog. Feel free to comment as much as you like, and you can also subscribe to the blog.

Today was Ofelia's third trip to the dog park. Her second time went great! She had so much fun! After a couple of minutes' hesitation, she jumped right in and had fun. Then today, it was even better. She didn't hesitate at all. I wish she had a dog her own size to play with, though. All of the dogs there are much larger than her - twenty to sixty pounds heavier. The smallest one is another 5 month old puppy that has about 15 pounds on her. They love each other, but the size difference is pretty… Continue