Swimming
I thought dogs can swim and love playing in water.
Toby, on the other hand, is afraid of water.
She freezes when I bath her, and her whole body shakes when I walk her along the beach close to the lake.
I have seen lots of dogs running, swimming, and playing fetch (from water) happily at the beach.
Is it just Toby or are corgis afraid of water?

Barking
Toby barks a lot, but she only barks to tell us if someone is visiting or when… Continue

Toby was a fit/healthy little puppy when she joined my family.
She used to run around a lot everyday.
After living with us for a year, she started gaining weight and wasn't really active most of the time.
When I took her out for a walk, she would sit and rest after walking for less than 200 meters.
Her ideal body weight is 25 lbs, but her peak weight was 37 lbs.
Later on, I realized that her obesity was partially related to her dog food.
I have been feeding her… Continue

TIG is now known as TIGZILLA! The biggest, naughtiest corgi ever! I've been 'acclimating" TIG to going to the barn and being around the horses. I use the term acclimate loosely cuz the barn seems to be where TIG is the naughtiest!

The barn where I keep my horse is set on about 50+ acres of paddocks open fields and riding arenas. Tig's favorite thing to do is run, run, run through the open fields and go sniff out critters. Then he does laps in the indoor arena. Once you left him off… Continue

A few months ago, we attended a neighborhood dog social/ fundraiser for the local shelter. One of the items available for auction was a "hosted party for your dog and friends" donated by our local pet store, Pussy & Pooch. As soon as we saw it, Stacy was like "I'm totally getting that for Keahi's first bday party." She spent the rest of the evening hovering over the silent auction sheet to make sure nobody outbid us. Sure enough, we… Continue

Chosing the right brush for our evershedding corgis!!!!

I would love to know what brushes everyone has found to work the best on this thick/coarse/shedding coat our corgi's often have!!!! I stood in the pet store in shock at the huge selection and extreme price ranges. I just don't know if spending the extra money is worth it or if there are brushes that work just as well in the more moderate price range. I would love anyone's recommendations and advice!

My little princess Bella arrived home yesterday from her visit to the vet to be spayed.
Everything went really well & she is doing really well.

The one problem we now have is that our 3 month old male Beagle keeps mounting her...and *humping*.
This is really confusing since he never did that before, except for maybe 2 occasions.
He is going crazy, constantly mounting her, but why now?

Im so worried about her getting hurt that I've seperated them, and I… Continue

Back in March one of my Goals in Life came true. I rescued a beautiful dog whom I named Asher. He was everything I had wanted. A German Shepherd/Malamute mix, and quite the big boy for his 8 weeks *somewhere around 20 lbs when we first met* Gorgeous bright happy and yellow eyes, and cute giant floppy ears that had the promise of standing tall one day. When I first saw him he was walking with his foster mother Taya. "What a beautiful puppy you have." I said to her, "Oh he's not mine. I'm just… Continue

Update on Dragster being sick

First of all thanks for all of you who have left the nice get well soon comments!

i took drag to the vet today and he wasnt acting like himself.
he was shivering and staying real close to me.
When he doc came in he climbed up my sholder and was scared.
the doc said he has a virus, and gave him a penicilin shot.
i also got pills to give him (its penicillin pills) and pills for diarrahea.
he still wont eat or hardly drink.


i cant help but be… Continue

A new update on Trice

Since Trice got sick a few weeks ago, he has been cooped up indoors all day, only let outside to go #2, he goes #1 on pads we leave in certain areas of the house. The Vet said not to let to make sure he doesn't get sick again and until he gets the last set of his puppy shots and rabies shot. So you can imagine how much energy Trice has when we get home from work. The most activity he was getting was us training him. So far he has learned how to sit, stay and sometimes lay down, we're still… Continue

Brewster is a part of the family

It has now been a week since Brewster joined our family and I must say we have been truly blessed. He is such a sweet and affectionate dog. I feel bad for those who lost him, but their loss is my gain. He is like my shadow, following me from room to room, like he is afraid I will leave without him. Every morning he greets me with his happy face. He encourages me to walk, which both of us need cause we are both packing around some extra pounds. He is such a joy and a blessing to my family. Thank… Continue

Yes, Halloween is near and time to beware what is out there or who comes to your door! 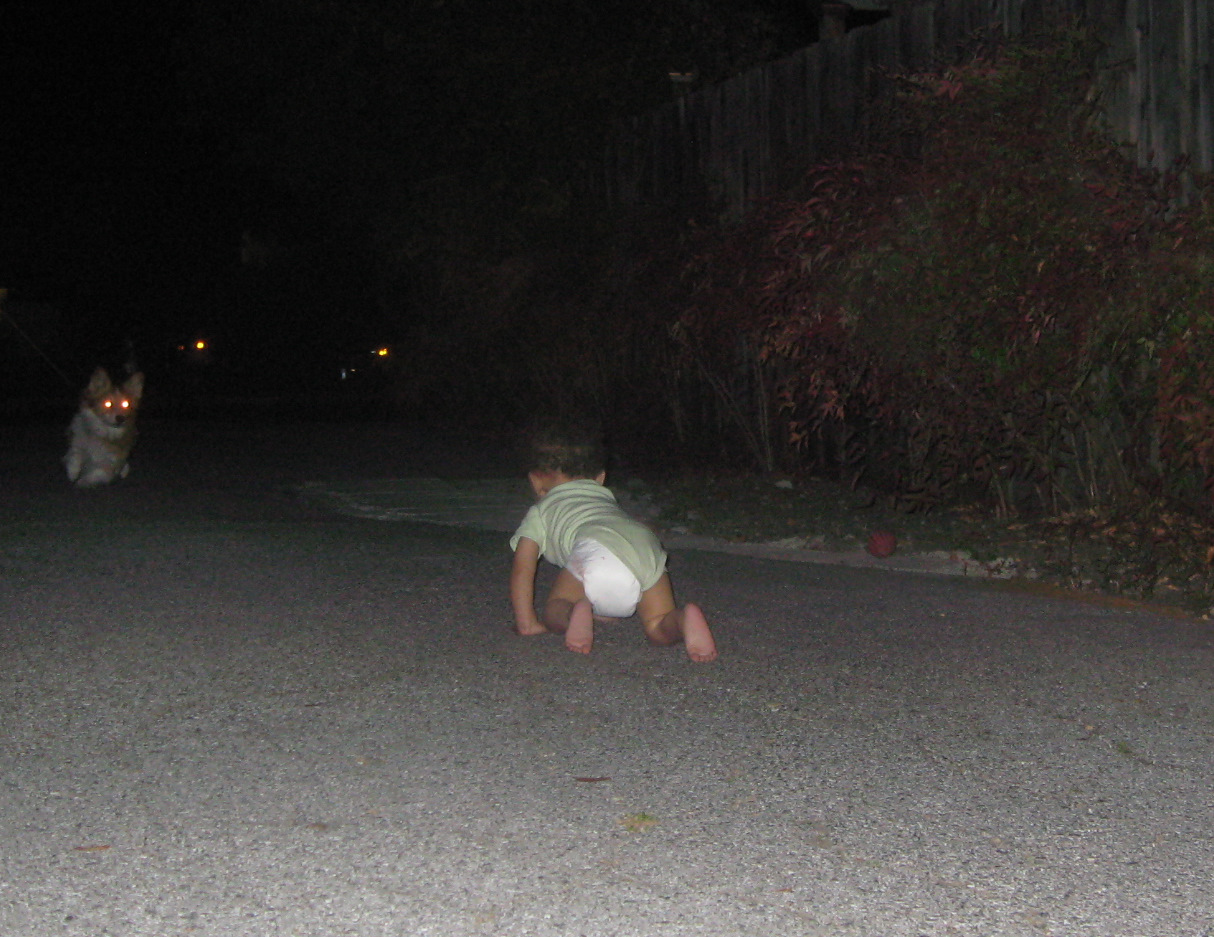 never know what is out there lurking in the night!

do read it all on sansanpups

We made our first trip out to this wonderful event for an even more wonderful cause. Since we adopted Roady from the rescue group that this event benefitted how could we not go?? We made some new friends and spent the day smiling at all the "shorties" running around. We did enter the costume contest with Roady as a "Watch"dog and Ziggy as Napoleon "Bone-apart". Ziggy won most original costume, but alas he wasn't amused - he only wanted out of the costume. LOL
Update: Over $6,500 was raised… Continue

Wow, time flies when you are having fun!! It seems like just yesterday we picked Lance up from the breeder. He is just so much fun and turning out to be a great dog. The teenage stage is over, we survived, although he altogether didnt give us that much trouble, of course there were times
that we had to make sure he knew we were boss and he does, if I could only get that to my daughters head, lol....she just turned 13 today, the 29th!!! Yikes....teenage dog years are so much easier to deal… Continue

Yesterday we went to the dog park and Owen had a good day. We gave him a bath (even though we was wet from the creek) and found 3 or 4 flees that abandoned ship with the water. Yar.. we have been flee free so far and I'm really sure when it hapened but I was good and told my mom just in case Rusty the cat has them (very very allergic). So on our way up to the mountains today we stopped by the vet to pick up some de-flee medication (I honestly didn't care what kind). It was very slow so I… Continue

A Must-See for All Corgi Lovers!!

***
Found: Adorable Corgi luggage. LOVE IT SO MUCH!
Find it here 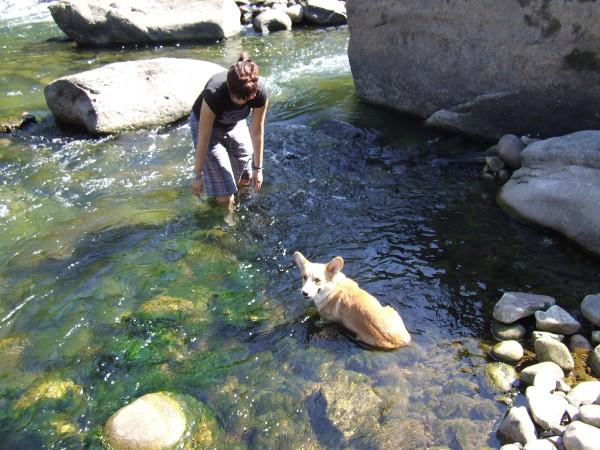 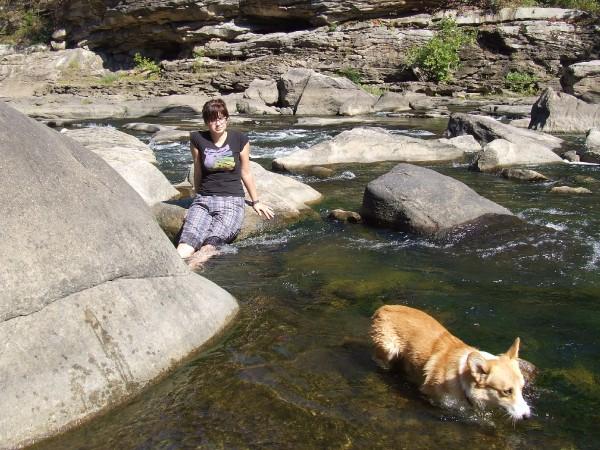 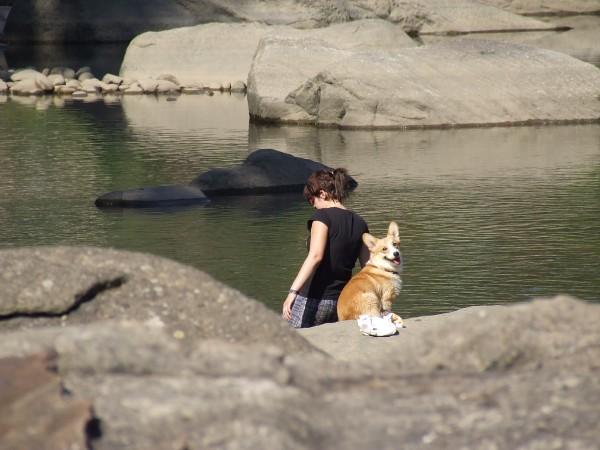 We went to the New River in West Virginia a couple of weeks ago to visit my grandmother. I had forgotten how much Conor likes to… Continue

I think Cobi is now beginning to think that this getting old thing just absolutely sucks lately. Cobi was 11 years old in June and he has been such a trooper his whole life dealing with epilepsy & all the meds that go with that, but now he seems to be showing the signs of degenerative disc disease. First it started with us noticing that he was slightly dragging his left rear leg occasionally and now as of Sunday he is really struggling to the point where we need to help him at times. He… Continue

Well last night I think I got a taste of what it is like running with a border collie. If I ever mention the want to get a border collie someone please refer me to this post unless I'm in incredible shape and can run 10 miles without losing my breath.

Bernie was WIRED last night. We did the standard course first and it was pretty winding - she decided I wasn't giving instructions fast enough and started taking obstacles on her own or popping behind one of the tunnels to eat acorns.… Continue

My husband and I have recently been talking, pretty seriously (as in he's already contacted a breeder and been put on a waiting list) about getting an Australian Shepherd puppy. He has no doubts and is ready, I on the other hand have my concerns. Kiwi will be turning 1 in February when we will also be adding this new pup to our lives. Have any of you, I'm sure many of you have, added new pups to your lives with younger ones in the picture already?
If you have, how have they adapted? What… Continue