Carma warms up the whelping box!

Livvy is spending a little time in her room that will be her home for the next few weeks! Carma the cat likes to spend all his time there right now! 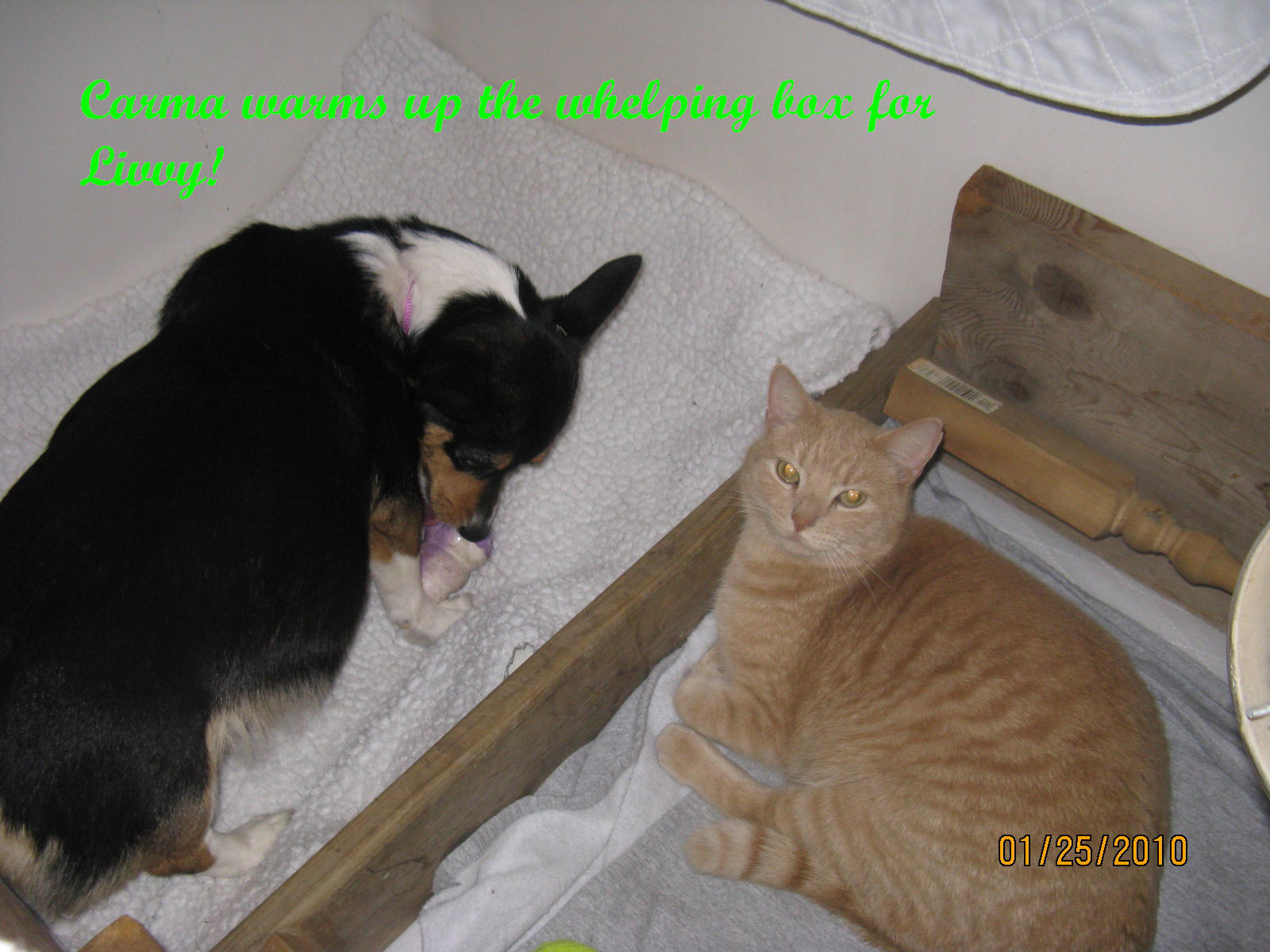 Less than a week to go till puppy time! Poor Carma he'll have to find a new home!

I haven't updated recently so I thought I'd just give a quick update. We ended up not moving because I couldn't come up with the money to pay 2 months of double rent. So for now we are just going to stay where we are until June and then try and find a new place. (Speaking of which does anyone know of an apartment complex in the Twin Cities or suburbs that allow dogs and isn't insanely expensive?)

I recently graduated from college and am looking for work, which hasn't been going very… Continue

My Baby, Zwei, is getting PLUUUMPY!

For some reason, our baby gets pretty fat when we leave him at our family's house.

Well, we left him there for about a week this time ... we come back ... and fwwwoooomp! He's big! After leaving with him at 15lb, he's now tipping the scales on both WiiFit and our weight at 20lb.

It's so cute to see him finally get some meat on those bones -- not too much though. :) Yaaay!

Adora is my first dog, We are in the prosses of housebraking her, from the day we got her home she has never liked the pee pads (esspecialy when there is someone in the house), first few week she would go beside it, than we finaly got her going on it, she is only on pee pads when we are out of the house, we have created a little den with for her in the laundry room. we also put her in there to eat, as when we got her she was free feeding, the only way we would get her to eat in sittings was to… Continue

Murphy's under the weather

Murphy hasn't been feeling too well. He's had diarrhea for a week now. I don't know how he got it or why its taking so long to get out of his system, but I feel really bad for him. We haven't been doing anything different with his food, he's been eating what he always eats. Right now, my poor baby is upstairs on our bed. I went up and checked on him and he wouldn't even move until I started rubbing his belly then he rolled onto his back, but he doesn't look like he's feeling too well. I feel… Continue

Chesneys breeder just contacted me and told me that she is expecting puppies again! Looks like I'm gonna get a new baby soon!!! I am so excited and can't hardly wait!!! Woooo hooooo!!!!

Lyla and Meexcelling in obedience! I just love how focused she is on me, she's so smart!

As many of you may have read, last week I took back one of my pups...it took Bella about 4 days and now they are best buds!!!!! 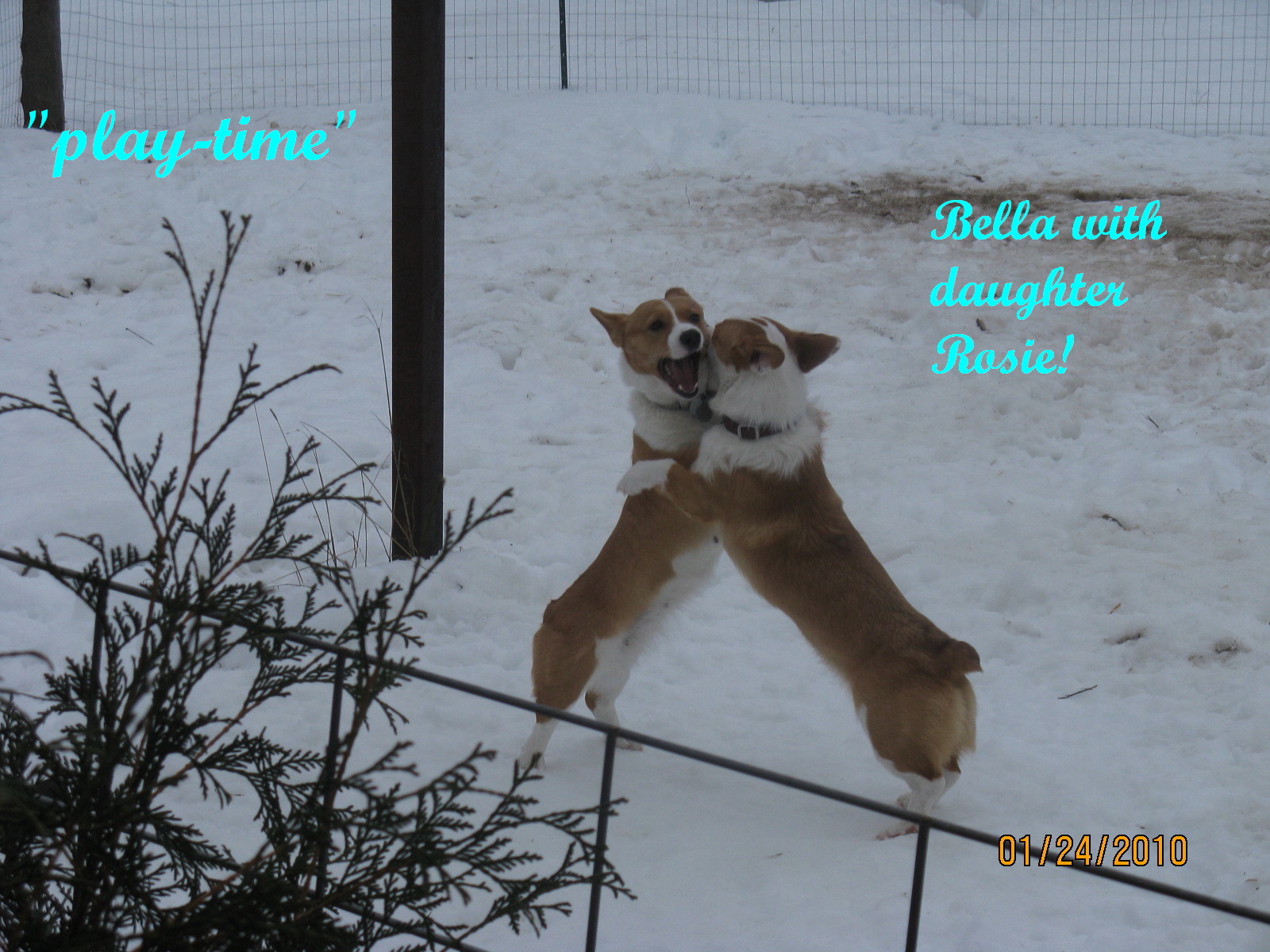 I keep wondering if they know they are related, not in the sense that people do but if there's something that makes them feel closer???? Rosie is doing well but will need a few minor adjustments before finding a forever home! It's so fun to watch these two… Continue

Gandalf has rallied well since the last pericardial tap for fluid on 1/16 and has a growing fan club in town. A cardiology visit confirmed the heart tumor diagnosis. We are following recommendations and after meeting with an oncologist, he had his 1st chemo on Thursday. Their goal is to shrink the tumor and/or prevent spread to other organs thereby keeping him more comfortable over the next weeks-months. No negative side effects yet. He sleeps a little more than he used to but otherwise is his… Continue

Sky and Lyla are getting a new brother on Thursday! His call name is Brando, after Marlon Brando because I love Guys and Dolls and Streetcare Named Desire, and I always thought it would be cool to have a big red dog named Brando... very masculine. His show name is Katahdin Into the Wild (breeder picked it).

My biggest concern is just making sure Lyla is okay making this transition. She has a tendency to get timid and stressed easily, so I am going to get her used to Brando slowly.… Continue

We had a great time today. There were 15 corgis that came and we had beautiful weather. Stanley had so much fun and now he's sooo… Continue

hi , my name is courtneyy , as you can see , i have a puppy , named molly , ! She is 10 weeks old , and very playful , i just wanted to have a breif bio , on me and her , to inform you ... if you are looking at this and are thinking about getting a puppy , corgis are SO CUTE , and Corgi/Beagle , are SO CUTE too , ! they are very playful tho , ! And another thing , im having a very hard time potty training her. Anyway , just a little bio on us , andi hope everyone has a great time with there… Continue

The perfect crate and food for a corgi.

I am getting my first corgi on the 31st and I am still getting things ready for him. The hardest thing I am having to make is what size crate and what type of food.

Since we are in economic times I am hoping to buy one crate and use spacers till he grows. But what size and dimesions (specifics if possible) of crate (Airport/Plastic type) do you have for your corgi as an adult?

Also, the nearest stores I have to me is Wal-mart and Petsmart. Which dry food (brand) should I… Continue

Corgi ownership if the owner is wheelchair bound

good friends of mine are getting a 6 month old female Pem today. One of the owners is wheelchair bound sometimes with a respirator. Long time Corgi fans, and previous Corgi owner, but he was healthier then.

I wonder is it okay to spray bitter Apple on the outside of plastic medical tubes so the dog will not chew on it?

I am excited for them because I know how much Rusty, now Chloe have enriched my life.

Oh the people at Dog Parks... 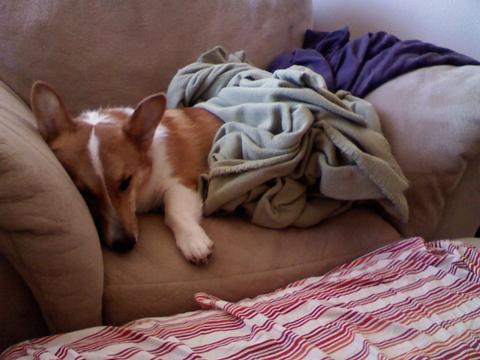 I take Sky for a walk everyday at a neighborhood park and then, time permitting, we stop at the dog park for a friendly romp and a play. I guess I just love my dog so much that I cannot comprehend other owners who are not as caring or observant of their dogs--especially at dog parks.

So yesterday, while Sky and I are playing fetch, a Lab and a Beagle (both males) are playing and wrestling right in front of me. I know the beagle from… Continue 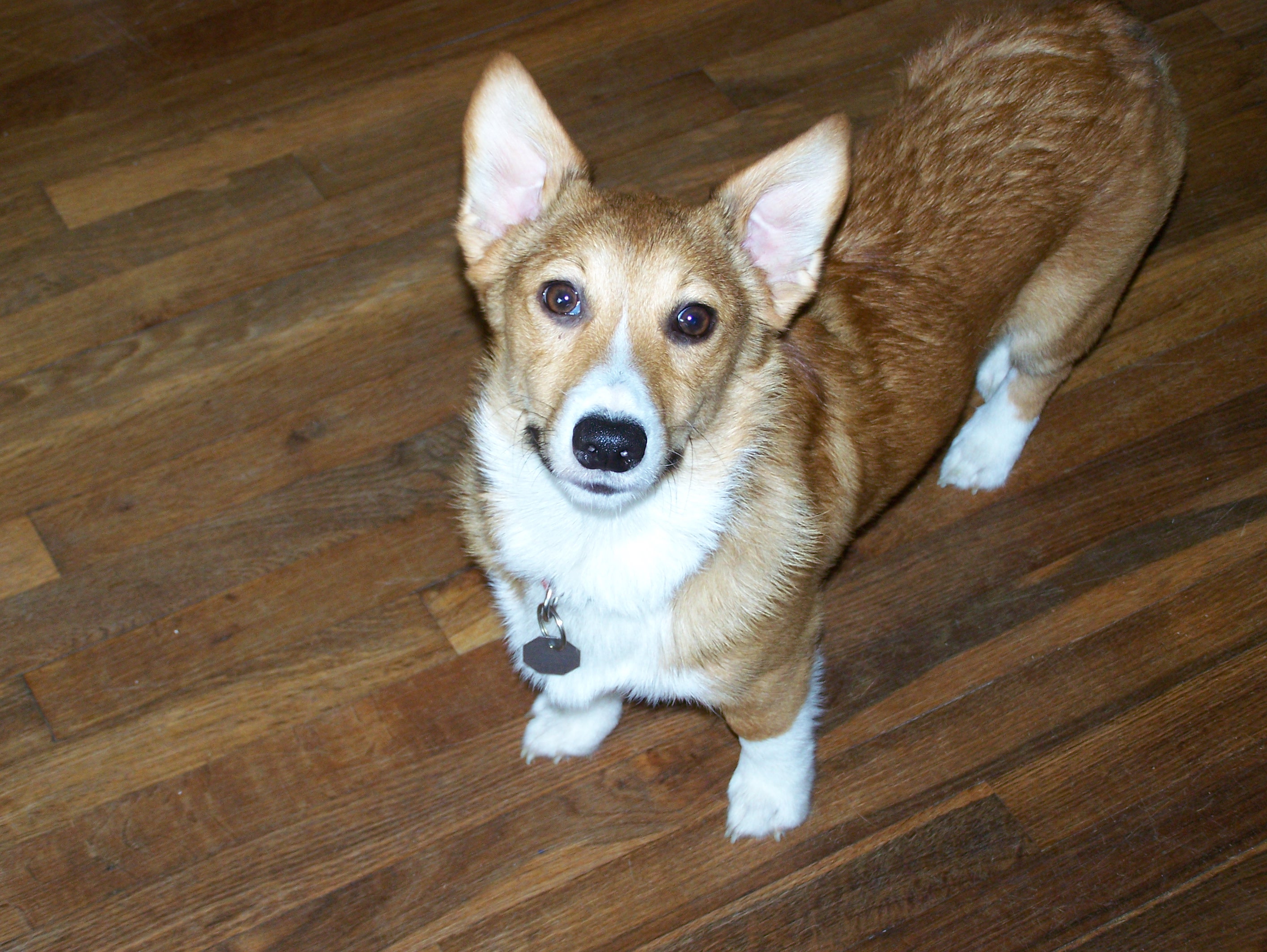 Red, with white face, neck and paws. docked tail. Not neutered. Has tags(all shots but his new rabies tag isnt on him) Vet: Hauppauge Animal Hospital

If anyone in the… Continue

We got our little Yumi back in August. She was extremely shy and wasn't too sure about us or her new home. Now, 5 months later, you wouldn't know that she was the same dog! Yumi is so bouncy it is unreal, lol. Whether it's time to eat, time to potty, or I just get up to go to the next room she is right there bouncing and spinning and just being a happy pup! She's still a bit shy around people she doesn't know, but a tummy scratch fixes that and she's instantly your best friend. She is a MAJOR… Continue

We had a great day and just wantted toshare it with someone. Today was the first time I had to leave my baby home alone all day. I took a class so I was gone from 7am till 630 pm. My husband works close so he came home at lunch but I did not known that till after I got h ome. When i got home she was fine I do belive I was more stressed then her. i got home we when for extra walk,played ball,curled up for a while and then at 9 p m she went to room and retired for the evening. It was a great day… Continue

Only a little over a week to go! 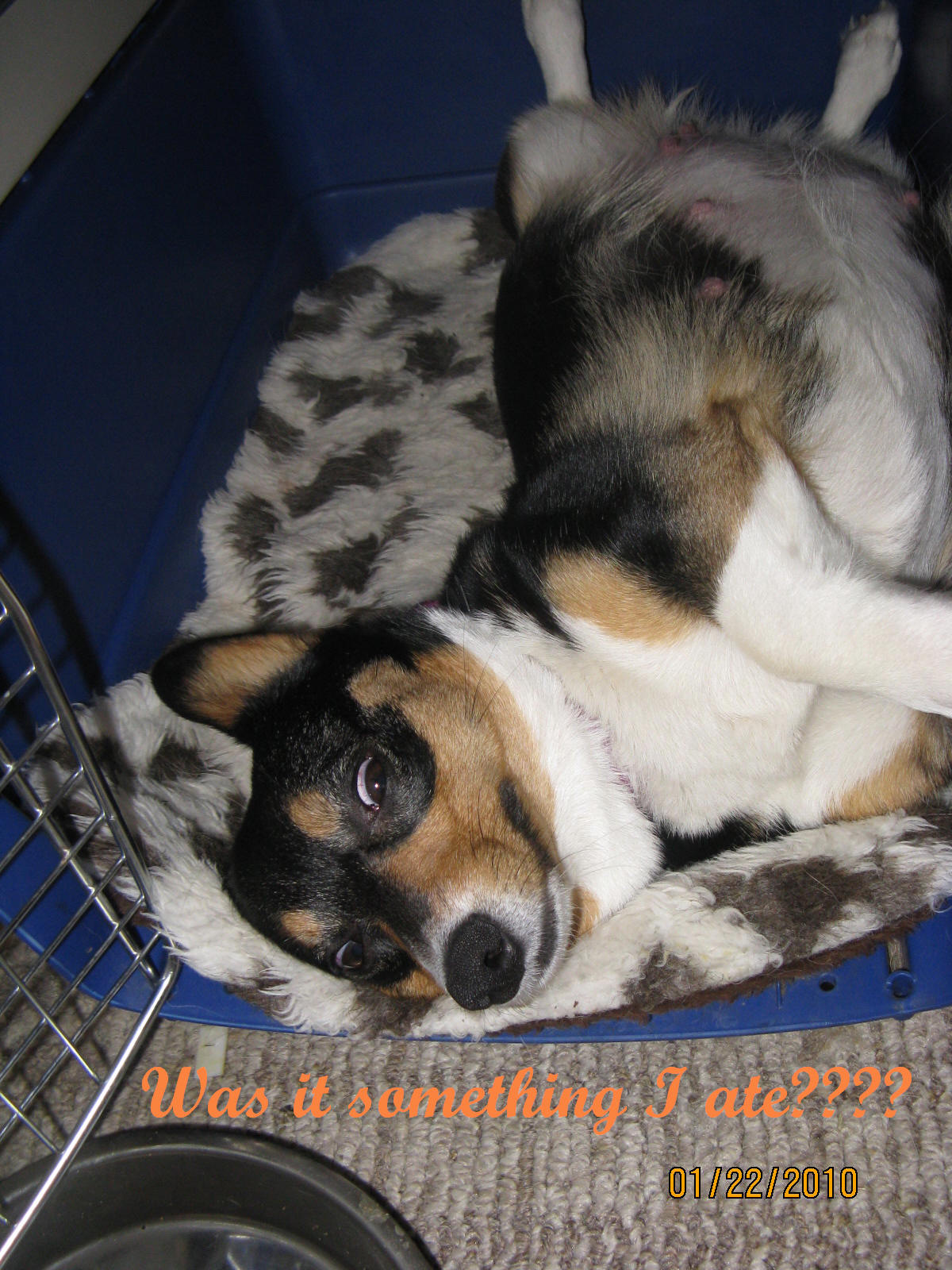 I have no idea if Livvy knows what's going on and she's still wagging her tail...but looking uncomfortable also!