Am I in a Canadian dream?

For a split second of a moment Cartersville, GA was the same temperature as Canada. GEEZE! But now Cartersville is getting warmer and Canada is getting colder. I like the snow a lot and hope it stays cold. Why you ask? Because my mommy gets to stay home! Yay me! I mean its great for her too, but hey this blog is about me. She was actually okay about the whole snow thing. She got really excited when her school sent a text saying there's no school Wednesday or Thursday, I thought she was just…

Gilly is loving all this snow!!! 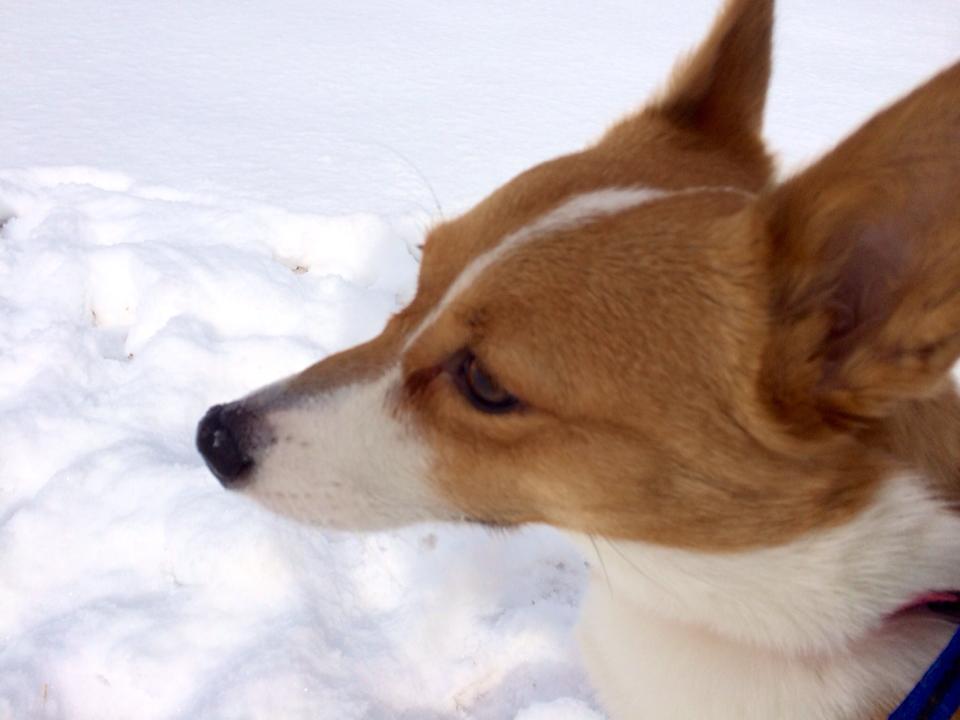 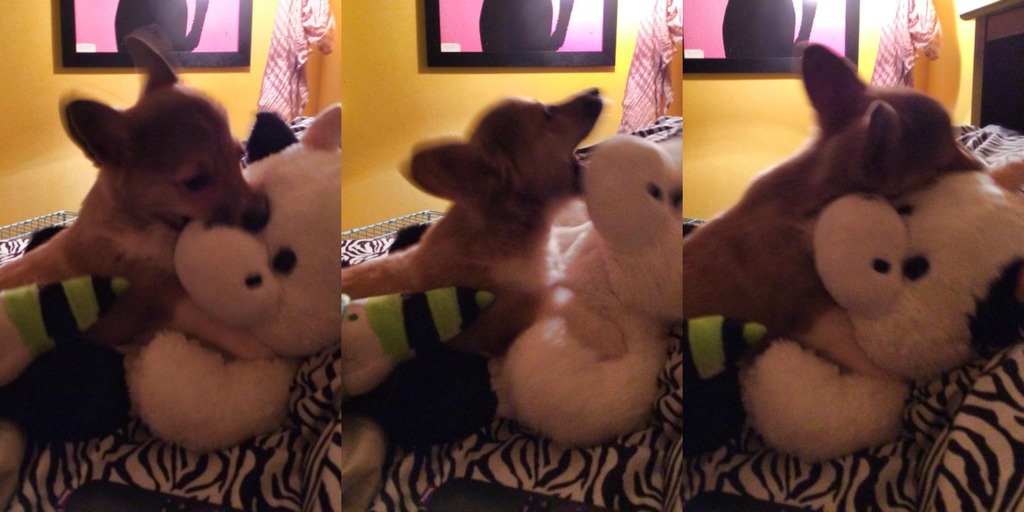 OK everyone, how do you walk a dog with five inch high legs in 10 inches of snow???

Long time no see I suppose? Yes, well, I am glad to say Bella is doing very well and has recently shed a few pounds. Our New Year was great, and so were our holidays. I am hoping the same went well for you and your furry children, and I wish the best possible this 2014.

From your experiences, what is/are the best airline to ship your puppy?  I know the options are very limited as far as who accepts pets as cargo, but out of the few that do, I'd like to know who's the safest.  Also, if it's a connected flight, is there anything to worry about?  I would choose a direct flight, but the airport that my breeder lived near doesn't have ANY non-stop flights to NY!

What is the white stuff falling from the sky? Snow? Can I play in it? I can! Yay! I love snow. Everyone this is my first time seeing snow, and I love it. All you other Corgis who haven't seen snow, it is awesome. I can make corgi angels, snowcorgis, oh and fetch snow sticks. Maybe even hide my friend copper the cat in the snow. If its snowing where you live, comment and like and don't forget to enjoy it.

Show of paws! Who is allowed to eat table food? Yea i'm not. I mean occasionally yeah I get a drop or so. But its only on special occasions. Like my 1st birthday, ahhhh it was delicious. My mom and grandma made me a doggy cake. It was soooo good. They put all my favorite things on one plate. Ice cream, oranges, cake, ice cream, did I already say that? Oh and ice cream. Anyways...., my mom is starting to be more generous each day. I like it...a lot. Even though she gives me table food, she…

Anyone else hearing about this?  Apparently it's a new virus and dogs just don't have any kind of immunity to it.  There is a vaccine.  It hits them just like it hits us...some not so bad and some very seriously.  I would say it's something that those who take their dogs to dog parks, doggy day care and where ever there is a group of dogs getting together should be very aware of.…

Walking a new puppy? Leaving him at home? 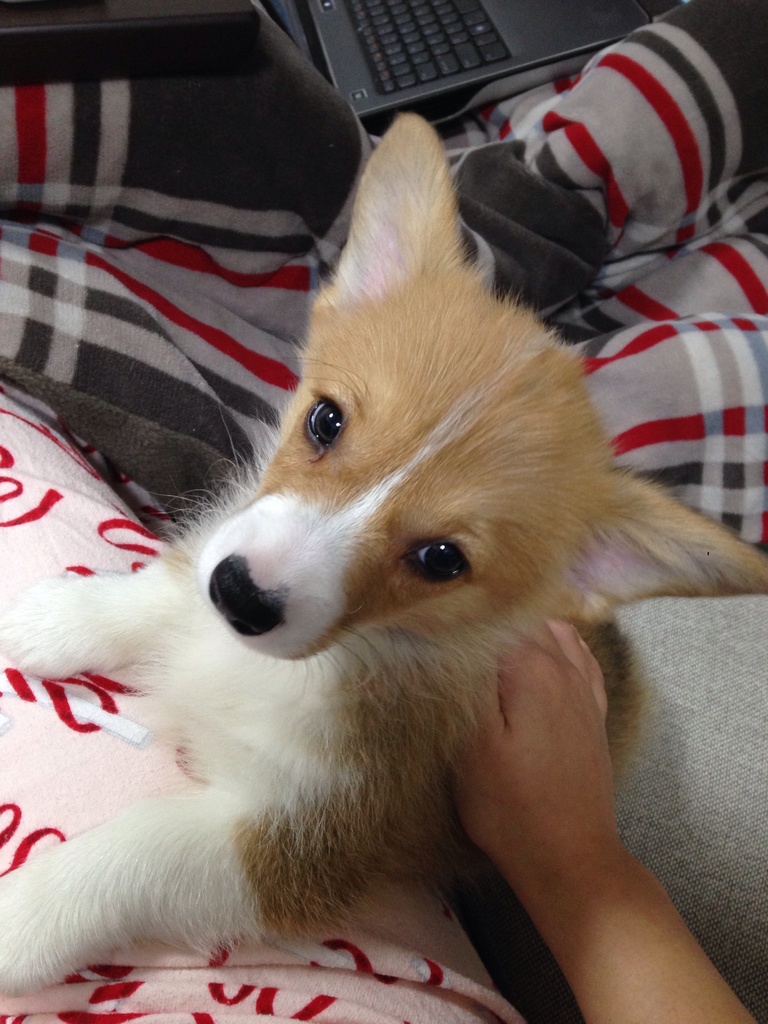 Shanks has had a couple of meals since my last post and he hasn't had any issues with vomiting. Things are looking good!

I need to run to the dry cleaners today but am apprehensive about both taking Shanks with me and leaving him at home by himself. The dry cleaners is just a short walk away, but he hasn't gotten…

Monday to Friday is such a drag. I would much rather sleep in, but my mom doesn't agree. She insists on getting up at 5:30 in the morning. I like to sleep till at least 8:00 and may even take a nap later. I try and try to convince her to sleep, but she has to go to school. Who needs school when you have me? Just kidding kids, go to school! Now weekends, I like to get up nice and yearly. Maybe around 7:00, but mom wants to sleep til 10:00. Why? We only have two days to spend time together,…

Last Saturday, I took Redford & Tucker to the dog park.  Redford likes to run up and down the fence line with the big dogs (we're on the small dog side).  I let him run until he was really tired.

That night he was moving slowly.  I figured it was weekend warrior syndrome since we hadn't been to the park for a while.  He gets lots of sprinting in the yard, but not sustained running. 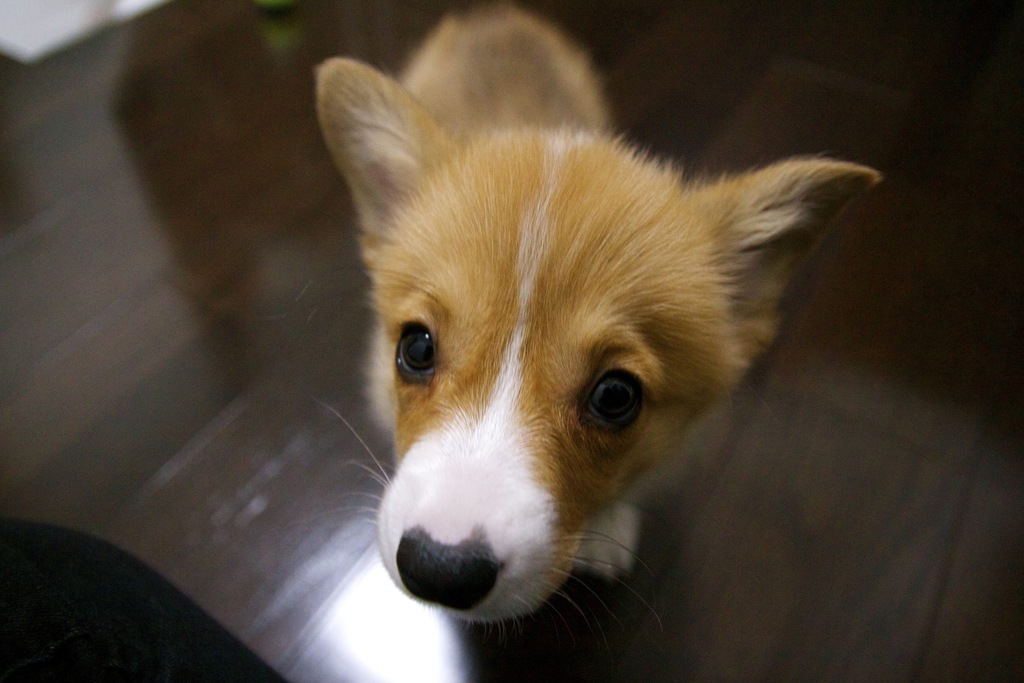 It's been a long, long time since I've visited mycorgi.com, and even longer still since I posted about starting my search for a puppy back in May 2013. I never did hear back from that breeder, but long story short, we now have an eight week old red & white PWC named Shanks.

The Coat, She is a-Blowin'

It's January. We're in what passes for the Northern hemisphere. Unless the Human is sadly mistaken, it's the middle of the freakin' winter!

But Cassie the Corgi, Queen of the Universe and Empress of All Time, Space, and Eternity,i is already blowing her coat.

Can someone tell my mom what the word redecorating means?

I think my mom has a problem... Everyday she leaves for school MY room that I share with her is neat and tidy, so I like to spruce it up a bit. I take all my toys out of my basket and put them all around the room. That's called redecorating but she doesn't know that. It looks so good! Well at least I think so. There's squeaky toys by the bed, talking toys by the bookshelf, oh and cotton everywhere; like its snowing. Since it is winter time. But when she gets home she picks them all up and…

Now, I think this pose looks like a plate of tamales: 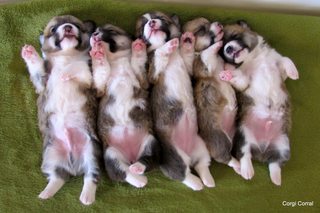 How adorable can you get, eh? One of these  little tamales is soon to be the Queen of the Universe's new roommate. Won't she be surprised?!

The Queen has still got a lot of ginger in her for a seven-year-old dowager. We actually jogged almost a full mile last night -- no mean feat for a dog…

Every morning it's the same routine. Mom gets up, takes me out, feeds me, takes me out again, then leaves for school. Sometimes i like to mix it up a little and not eat. That really throws her off. Sometime she's even late for school. Those extra minutes I take eating my food slowly, are the moments I cherish. What she doesn't know is that I hide leftover food in my cage for later. Muhahaha

We are getting our first corgster in about 4 weeks! Any tips on welcoming him home for the first time to make him feel safe and comfortable?  He's being shipped by plane and it's a 5.5hr flight.

We've both had dogs in the past but it's been a while since having a young puppy.  I grew up around a lot of dogs and always read training tips, but would like to hear your stories from personal experiences!

Thank you for any help and advice you…

We've had a pretty big last few months (my sister passed away October 27th and his grandma passed away December 11th) so with the services and holidays and visits and family get-togethers, we didn't really get to decorate the house like we wanted to. We put up a tree and played Elf on the Shelf a bit, but that was the extent of it. Any who, it's Christmas Eve morning and my boyfriend says he has a surprise for me. We go outside and he says, "I know we didn't get a chance to decorate this…

Thank you everyone for the help with potty training. I know that my puppy doesn't know to do it on his own, haha. He just refused to do it period. He's gotten so much better, though. Not one single spot on my carpet in the last two days. He's having no trouble going outside and I'm praising him when he does. Thank you so much for all the help! He's having a little trouble wanting to do his other business outside, but we'll get there too! :) I know watching our other corgi use the potty for…