We brought Maggie home and settled in to adjust to the new situation for all of us. She's so darn cute, we immediately fell in love with her.

She explored the house and we set her up with her food and water.

We can't get over all her cute expressions. At first she looks so serious, then she smiles, I swear, sticks her tongue out and grins up at us. She's so fluffy and looks like a big hamster from behind!

Kaley~corgi and I both say the same thing, agility, we love it, and it is soo much nicer now that we are beginning to look pretty good on the course, staying together! She still fraps a bit, or gets frustrated, or something seems to happen, where she goes off course!

Dan takes pics and I look at them all, and try to figure out went wrong. She will run off course, but I am able to bring her back quicker and resume the sequence.

This July 4th weekend it is a USDAA… Continue

Please ignore the dates on the pictures I took. My digital camera was having issues that day. These photos are from the 6/28/08 Corgi Fun Day held at Featherly Park in Anaheim.

Hey everyone, I wanted to post a little update on the goings-on with our little man.
First off, Grover is in his third week of obedience training classes. So far we have learned an awesome sit, a reluctant down and a work-in-progress stay. He's doing great on the leash. Our walks are easy and fun now that he's started to get into them. At first when started the daily double of walks, he was so reluctant to go. But now he goes to the door when I grab the leash! One of the great parts about… Continue

My husband (Kik) joined a while back when we took in Foxie from our son. Everyone was very helpful with the issues that he had and I wanted to say "Thanks" again. He hasn't had much spare time, so I wanted to come on board for him.

Foxie is on the tiny side, she has now topped the scales at 11.5 pounds, is 9 inches tall and 21 inches long. She is now caught up with all her veterinary needs including being spayed, which she came through like a champ. One of the Vet… Continue

Yesterday Spartacus and I went to our very first meet-up. And what a meet-up it was! Hosted by the Pembroke Welsh Corgi Club of Southern California, Spartacus and I met tons and tons of corgis, corgi owners and corgi fans from all around! I'd like to say there were atleast 50-60 corgis all over, it was so cute and awesome! There were tables of food, raffle prizes, and gifts that were enjoyed by all, there were contests that were held, and it was just a… Continue

Alright, Kiwi is 5 1/2 months, and she has begun to lose her puppy teeth, and as a result her breath is absolutely atrocious. I spoke to a vet tech at the veterinary hospital and she said that cutting teeth can cause bad breath in puppies. So...my question is, does anybody know of any remedies, even temporary, to help with puppy halitosis? Any suggestions would be greatly appreciated, as we are at the mercy of our pup with the fishy breath...

JD is my first dog ever and Im learning lot. But yesterday I found a 8 week old lab puppy for my husband (not my choice, i would have gotten another corgi). But we have been having problems with the a/c in our house and the guys that came to work with it left it in pices. But it was putting out a lil cold air IN THE BASEMENT!! So Scott (my husband) and my dad put it back to geather and its now cooler in here than it was, i told you that to tell u this, when we got cope… Continue

For those of you who don't check CuteOverload =)

Ryan and I have talked about this subject off and on throughout the past few weeks. Seeing as how I own three cats, catnip is always an item we have in the house. After seeing my cats get "high," Ryan wondered if there was an herb that does the same thing for dogs. I told him that there probably was. After all cinnamon is catnip for tigers.

Our curiosity is constantly piqued by this thought. It's such a strange question that I want to ask it here. Have any of you ever wondered about… Continue

Guess what I found at Target

We were shopping at Target today and guess what we found? Corgis!!! Our dogs have gone main stream :)

Heyy everyone, this is Siduri's daughter, Becca. She has let me take over the corgi page, since she doesn't have the time for it. :)

Jake is doing well. I took him down to the sea wall on Weds., and he ran around with my boyfriend and had a long walk. He met many new dogs, and I don't think he really reacts well with other animals. He does okay if he's on his home turf, though, so I'm trying to get my friend's chocolate lab puppy over to play with him.

More activities are in order.

I've been trying to think of ways to get Leon out and more thoroughly active at night. Walks just aren't enough to wear him out with all the things he gets distracted by, and then with the added problem of I can't see what he's deciding he wants to nom on. For the most part when we're out walking around he'll stay away from the bad or dangerous things, ciggarette butts, other dog poop and the like, but every so often he'll find something he shouldn't have. One of the last times it was a… Continue

Most admired dog in town

As I posted here previously, corgis are not seen so often in our small country in the middle of Europe. My Risa is clearly the only corgi living in my town and its surroundings. When I walk him, I'm being stopped by many people asking me questions and admiring my Risa. It seems that nobody knows this breed here, I feel like a corgi pioneer. Sometimes I'm a bit offended by people telling me what a nice mixture or crossbreed it is! I'm a big educator here and first results are coming: no-one… Continue

i just wanted to say hi to everyone!
my name is lynn and my corgi's name is toto!
i've been coming to this site for the past several months and just recently joined!
hope you'll come take a look at the pictures!

I'm not listening.....I want to play with that doggie across the street!

Lance gets very excited when he sees a neighbor dog or any dog walking and wants to go play. It is to the point that he looses his concentration and doesnt hear a word I am saying. Does anyone have any help on how to make him concentrate on me and not the other dogs he sees. He is on a leash and still cannot hear me talking.

What are your experiences with this and what did you do to help the situation. Luckily this time I was standing in front of my house so I just took him back… Continue

Not usually a morning person, especially on the weekends, but 10 am should be doable. Just can't drink too much tonight =) Pretty psyched to go, hopefully there's a good turnout. I see some others here have also confirmed they are going to attend. Whenever I walk around NYC, I always get the "we never see Corgi's around" comment from people. And I observe the same phenomenon, as I only see perhaps one other Corgi every other month or so. It'll be hilarious to see an entire gaggle of them… Continue

How to have a GREAT WEEKEND--Kaley~corgi style 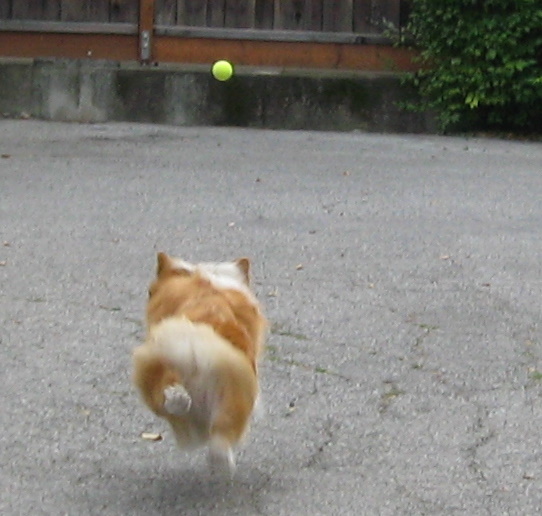 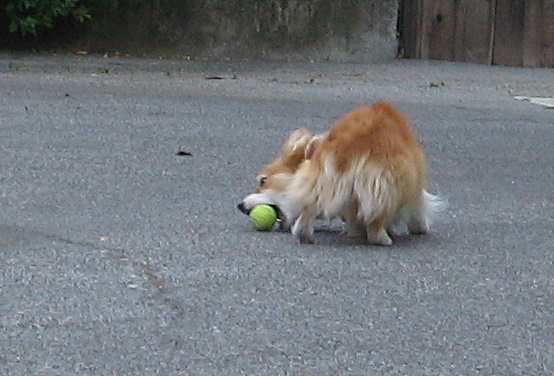 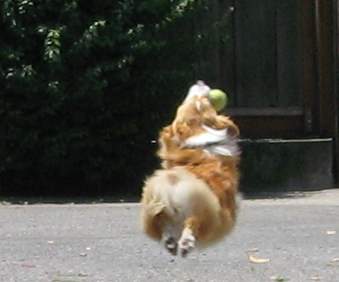 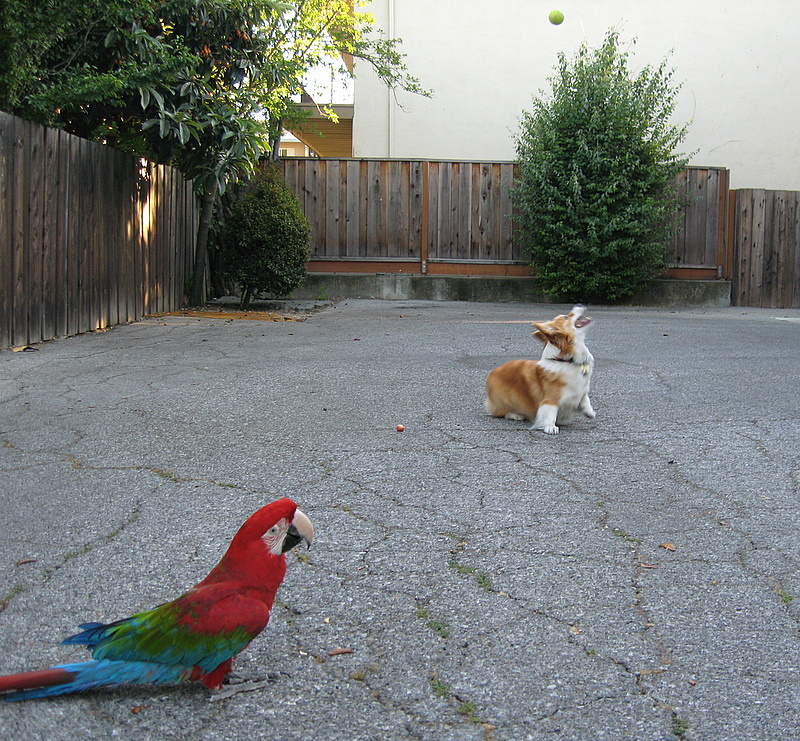 I've attached a link to a dogster post that delves into the nutritional world of dog food. Sedona (#63219) on dogster has compiled a list of most dog foods available and obtained the Kcals per lb or kg from the various manufacturers that don't list the information on their bags. Purpose of the post was that YOU as the consumer could see how much per month it costs to feed your dog a particular food. Interesting results showed that expensive brands don't cost that much more than cheaper brands… Continue

So two weeks ago daddy started acting funny in our little apartment. One afternoon he brought in a bunch of boxes that smelled like eats and other interesting things! I thought they were toys and jumped through them sniffing and playing making daddy laugh.

Then for some strange reason he started putting things in these boxes. Mommy only did this when she came to visit and when she was done she would leave us for long periods of time! I was getting worried and over the next few days… Continue