Our new corgi puppy Nellie is very cute! We bought her on 7-8-09 which is supposed to be a lucky day and we think that is true. Last Tuesday, we took her to the vet to get her second shot and she didn't even flinch! The vet had her distratcted with treats and she didn't even notice the shot. She is about 2 1/2 months old and she is growing very quickly. She sleeps a lot but most puppies do, she is her sweetest when she is asleep. We have taken her on a couple of successful walks which we were… Continue

So today was Tiggers big day, he went for surgery =[. Just a routine neutering but STILL with all of Tiggers other health issues I was tremendously WORRIED!. he came out alright though. he's very sleepy. =[

any tips on how to keep him inactive for 10 days X.X lol.

Harley had his first vet visit today, since we brought him home from the breeder's. I couldn't go, because I had to work, but my boyfriend Evan took him during his lunch time. Harley weighs a bit over 8 lbs. He will be 12 weeks old next Monday. The vet was a bit concerned with Harley's front legs. He has little knots on the sides of his legs above his paws, and she thinks it may just be because of growing, but he might have bowed legs when he grows up. Let's hope not, because bowed legs is… Continue

I just got my little Shorgi, Mischa, about a week ago, and she's the first puppy I've ever had to deal with. So far, she has a habit of peeing and pooping in the floor and likes to eat anything within her reach. I've looked online for training tips, but all of them seem to shout "one size fits all," which, let's face it, isn't usually true. Can anyone give me some tips for training her?

Hi I am new to Mycorgi.com. I have a 13 week old corgi and had a few questions. what dog food do you feed your corgi-- I am currently using NUTRO choice--don't know if it is the best --dont mind paying a lot as long as it is good and she is healthy. Also, what do you do to exercise your corgii. I understand they need A LOT of exercise but I will return to work in september (I am a teacher) and she will be crated from 8-2:30. Any comments/suggestions are greatly appreciated. Thanks Mary and Lulu

thedailycorgi.blogspot.com
(Check it out for a Celebrity Corgi this weekend!!!)

Penny is at the vet right now getting spayed. :(
I felt so bad when they took her away. I won't get to pick her up until tomorrow morning because they insist on keeping them overnight to check on them. I miss my little girl already!
I felt really bad because she followed me around all morning saying "hey mom, I see you fed Faulks but ummm... you forgot me?!" "Hey Mom... where's my water at... I'm a little parched" "Hey Mom, no seriously I'm totally famished where is my breakfast...… Continue

Murphy can finally jump onto the couch and chairs. We always had to lift him up before, but now he can do it on his own. :o) He can also jump onto the twin beds in the guest room, which is really difficult when I'm trying to move Stella over there so he doesn't try and play with her like one of his squeakers. I swear, he thinks she's a toy.

I have noticed that he's been getting scabs on different parts of his body and I don't know where they're coming from. The one on his chest was… Continue

I'm taking Faye camping for the first time ever! She's not a very active dog if she's without her new friend Katamari (who is settling in well, except for a couple of fights that ended with me getting hurt). The other dog is more active, but very young and needs more training as she tends to run away. Faye is really good at staying by my side off-leash. I'm sure some of you have taken your corgis camping/hiking/etc (*ahem* John *ahem*). We'll be going to Lake Isabella with my boyfriend's… Continue

Thanks for the warm welcome!

As a newbie, I would like to thank those who have welcomed me and my wonderful little guy to mycorgi.com. I was hoping that this site would offer tips to help me solve my most pervasive corgi-related problem: FUR. EVERYWHERE. Including inside (not on or around, but actually inside) the spines of several old books in my living room bookcase. How can this be? I'm flummoxed; it's like nuclear fission or something. Well, happily, I found several clues that tell me I'm not alone. One… Continue

I've been wondering about what it is that makes grass so darn tasty! Hardy will do just about any trick he can to sneak a bite of grass.

I took him outside tonight to snap a few pictures of him. He knows that if I catch him eating a bunch of grass, he hears the most dreaded words on the planet..."no!" Those words immediately invoke the sad eyes, the droopy ears, and well, I'm sure if you could see his tail nub he would hide… Continue

So I think I might start making these for people on here. I've gotten a lot of good input on my corgi key chain that I made. I made a Corgi key chain for myself, & I think it turned out VERY cute. They are made out of chip proof clay. Painted with acrylic paint & covered with a air drying glaze. they are all hand made by me & painted by me. the paint/glaze MAY chip over time OR ruff ware & tare. But the clay will not chip. I can add anything to the corgi key chain if asked (… Continue

I am so excited to have found this website! Its great to see that there are so many other people who adore their furry little children as much as we all do. Now when I saw we I mean, me, my boyfriend Josh, my mother Lori, my father Tim, and my brothers Nick and Lane. We are puppy people!

My parents have 7 Pomeranians: Rusty, Julia, Nate, Lena, Sweetie, Possum, and Buttercup. 3 Great Danes: Kal-el, Sierra, and Cap. They also have a mut who happened to hit the "puppy lotto" when he… Continue

Camping Trip to the Beach

This was my first ever camping trip and Shiro's first encounter of ocean. I think my fiance Evan had camping trips before, but he was a boy and he probably don't remember much.
Anyways, we borrowed my dad's tent, got plenty of snacks, anti-mosquito stuff, bedding etc. We drove to the beach for about 2.5 hours due to pouring rain half the way. It was so bad that everyone had to slow down on the highway to 50 mph and turn on hazard lights. Shiro doesn't care about rain or storms so he just… Continue

Starbuck's first day as a babysitter!

This story begins with the fact that I am a recent college grad with the same job I had as a student-- babysitter. I've worked for one family for a year and a half and love them to pieces. There are two little girls and I alternate with both. Starbuck's daddy and I have been able to make it so someone is home every 4 hours to let her potty and play with her... until this week. He's out of town for a week and a half. What's a mommy of a puppy to do? Take her puppy to work! (this is where… Continue

I was outside pulling weeds, when Sheldon my new corgi disappeared into the long grass next door. I saw the tops of the weeds moving as he made his way through the tall weeds. Then, I heard a squeal. I called Sheldon's name, and he came running. When he found his way out of the tall weeds, he got a smile on his face, and a sparkle to his eyes as he brought me a live bunny. I told him to drop it, he did immediatelly, then the bunny scampered away, and Sheldon ran to me with pride in his eyes. Of… Continue

L wanted a girl pup, and I wanted a boy pup. It turns out the breeder has more boy pups than girl pups, so we're most likely to be getting a boy. We had a girl name (Rowen) all picked out and agreed upon.

Boy names are another story. L. watched too many episodes of Little Brittan with her mom, and decided we should name the pup Daffyth, which immediately failed my Dog Park test (what it would sound like to stand in a dog park yelling "________ Stop It!").

We want to have a… Continue

Ein's trip to my uncle's

Ein went on a somewhat of a long distance trip (1 1/2 hour trip) for the first time. He met and decided that he would try to dominate my uncle's Jack Russell, Bonzai, for the first 5 hours. The next day, thankfully, he lost interest/gave up. 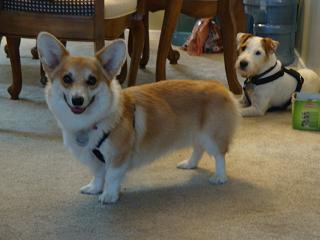 We went to the dog beach that's by their house. Ein wouldn't go in the water, but he played well with other dogs/Bonzai. He tried playing with with what looked like a young black Labrador… Continue

After 14 long hours on the road (7 hours each way), our Harley is finally home. So far, everything has been going great. We picked him up from the breeder's house at 7PM, and he stayed with us at a hotel last night. He cried for about the first hour after we left the house, but he eventually settled down. He even slept through the night without making an accident in his crate. He woke us up at 6:30AM.

We will be introducing him to our other dog, Bo, later this evening (he stayed with… Continue