Every couple days I drive the dogs down to the lake for a off-leashe walk. They love to be free running around in the fields chasing birds and each other. Today seemed extra perfect though walking through the late September sunshine with a soft breeze coming off the water. I actually stopped and did a 360 looking around me. The only thought going through my head was I wished I could stay here forever in this moment with my pack running happilly around me with great big doggie smiles.

I am sorry I haven't posted in quite a while. There has been a lot going on and not much has been good. The worst of the news is my boyfriends father has past away. We decided to wait on bring puppy home. I have come to the place where i am beginning to wonder when as my father puts it "we will get off the wrong side of the monopoly board" i know that life goes through cycles but this cycle needs to end soon. well I should probably run, I will check in as soon as I can

We had our first day of training school last Saturday and tomorrow will have the second. Nellie suprised us by acting quite nice and being one of the best! It seems that she acts better around large groups as opposed to individual newcomers. (She was awesome when we went to a parade too) She already knew sit, and watch me was no problem for her last week. Really looking forward to tomorrrow. Getting to be around all of the dogs is a lot of fun.

adding onto our family

We are corgi crazy like the rest of you I'm sure. One corgi is just not enough, so we want to find a young adult to rehome to be the companion of our darling 2 year old spayed tri female, Dixie. We are looking for a smaller non-aggressive dog who is already fixed, and current on shots and heartworm preventative. If anyone knows of a little doll who needs a new home, please let us know. Thanks! I am so happy to have discovered this group!

I let the dogs out to play when I got home from work today and thought I'd leave them out for the better part of the afternoon to just wrestle and run since it was such a nice day out. About 20 min after I let them out I heard a lot of noise. I went outside to see what was going on and the closer I got to the door, the more I could hear high-pitched crying and squealing. My first thought was "uh-oh!" I thought maybe they had gotten into a fight and one of them was getting hurt or another dog… Continue


I'm sorry if someone has posted this already but I had to share! Corgis in onesies? Insane… Continue

So, im getting Romeo's paw print tattoo today. The problem is that I just can't get romeo paw print on a paper. Anybody have a good idea? i tried dipping his paw in water than color paper, but it looks like a small puddle. The only perfect paw print he makes is when he steps on his urine on the wee wee pad and walk across the pad. *sigh* Im also unsure to get his paw on the back of my neck or the ankle?

Our doctor in Alpharetta, GA prescribed Previcox for pain caused by dysplasia in Lilly's left hip.

Two days later I found Lilly lying in the yard almost lifeless. We took her back to the animal hospital where she seemed to get better. We brought her home the next day. She had seizures and then was unconscious. We rushed her to the Georgia Veterinary Specialists.
This is the premier veterinary hospital in Atlanta.

I made a little growth collage of Ein's soon-to-be little brother, Brian.
(Will add photos as they are being sent from the breeder.)

ME?! UNFIT?! Boy did I have a few words for that breeder.

Okay, so totally off the topic of Corgis, but dang it this is my blog and I shall post whatever I want.
In all of our wedding planning, Jon and I have decided to boycott the traditional honeymoon plans, and take a week off work, set up our new house, and get a puppy. While I want another Corgi (can't have just one, right?) I have wanted a Boxer for as long as I can remember. We decided to search for a great breeder from which to add a Boxer female to our family.
Boxers are notorious… Continue

Tonight my husband's 13 year old sister tried taking Koby for a run. She trotted down his street, the street we walk Koby on when we visit (it always seemed safe) Well tonight for some reason a guy came home, did not even look and let his 2 pittbulls out of the car near where she was! The pittbulls made a bee-line right for them! Poor anna didn't know what to do except run! Thank god the owner came and threw himself over Koby so the pittbulls could not get him. Then he grabbed them and took… Continue

So it's been raining for the past week on and off. For the most part when it rains he lays on the balcony and just watches it rain or will pounce on the puddles that start to form. Sport got absolutely thrilled when I took him out yesterday. Usually it takes him about 3 minutes to go out, do his business and come back in. It's a different story when it's raining. As soon as he saw it was raining yesterday, he bolted out the door, ran down the stairs and started running in circles all over the… Continue

Pilgrim will be 1 at Thanksgiving. He is trying to see how much he can eat. He has pulled the insole out of most shoes in the house. He chews on rugs. He eats books.

A few days ago my hubby calls me at work.

"I just got off the phone with the vet. Pilgrim ate a cd, case and all."

Why in the world would a dog with lots of toys and chew sticks eat a cd??? The vet said he would be fine, just watch for signs of distress.

When I got home, he looked fine… Continue

I was stunned this morning when I read this news on the New York Times website: Large Dogs in Public Housing Are Now Endangered Species. The law restricts the breeds in which a resident of public housing may keep and forces residents to forfeit their dogs or be evicted. Some breeds affected are pure-bred or mixed bred pit bulls, Rottweilers and Doberman pinschers and any dog with an expected adult… Continue

However it feels like he hit those teen times kind of late. Lately he's been having accidental pees even though we take him out (at least 4+ times in the past week in his crate, on our bed AND on the floor), he's forgotten what some of our commands were even though we've used it daily and it's soooo frustrating. Before that he's was soo good on potty and everything.

I hope this passes by really quickly. That Nature's stuff is… Continue

Do other Corgis lay on their backs and wave? What does this mean?

Jack does this all the time. I figured he's trying to grab something, like his toy or my hand, but sometimes, he just does it at random. Is this just a Corgi thing?

Penny had some kind of a reaction last night. I have no idea what caused it. We went to Petco...bought some toys/treats/food...came home and she had dinner and went outside. About an hour later her face started to swell up. I gave her Benadryl and watched her closely. She seems fine today, other than her eyes are weepy (they have been for a week or so on and off I figure all the pollen in the air right now). I'm not sure if I should… Continue

All the listings about "free" dogs reminded me about this post from Best of Craigslist. It would be funny if it wasn't so sad.

Hello: You have reached ___-____, Tender Hearts Rescue. Due to the
high volume of calls we have been receiving, please listen closely to
the following options and choose the one that best describes you or
your situation:
>
Press 1 if you have a 10-year-old dog and your 15-year-old son has
suddenly become allergic and you need… Continue

For those in the Frederick, MD area I want to highly recommend Happy Hounds Lodge for boarding or daycare. I had a 10 day trip to the UK and was very stressed about how Monty would do away from me that long. I know that if he is distracted by other dogs he doesn't notice my absence as much so I wanted somewhere he was free to roam with other dogs as he is very socialized. He is also used to sleeping in my bed at night and I couldn't picture him in a crate/pen at night for that long. I found the… Continue 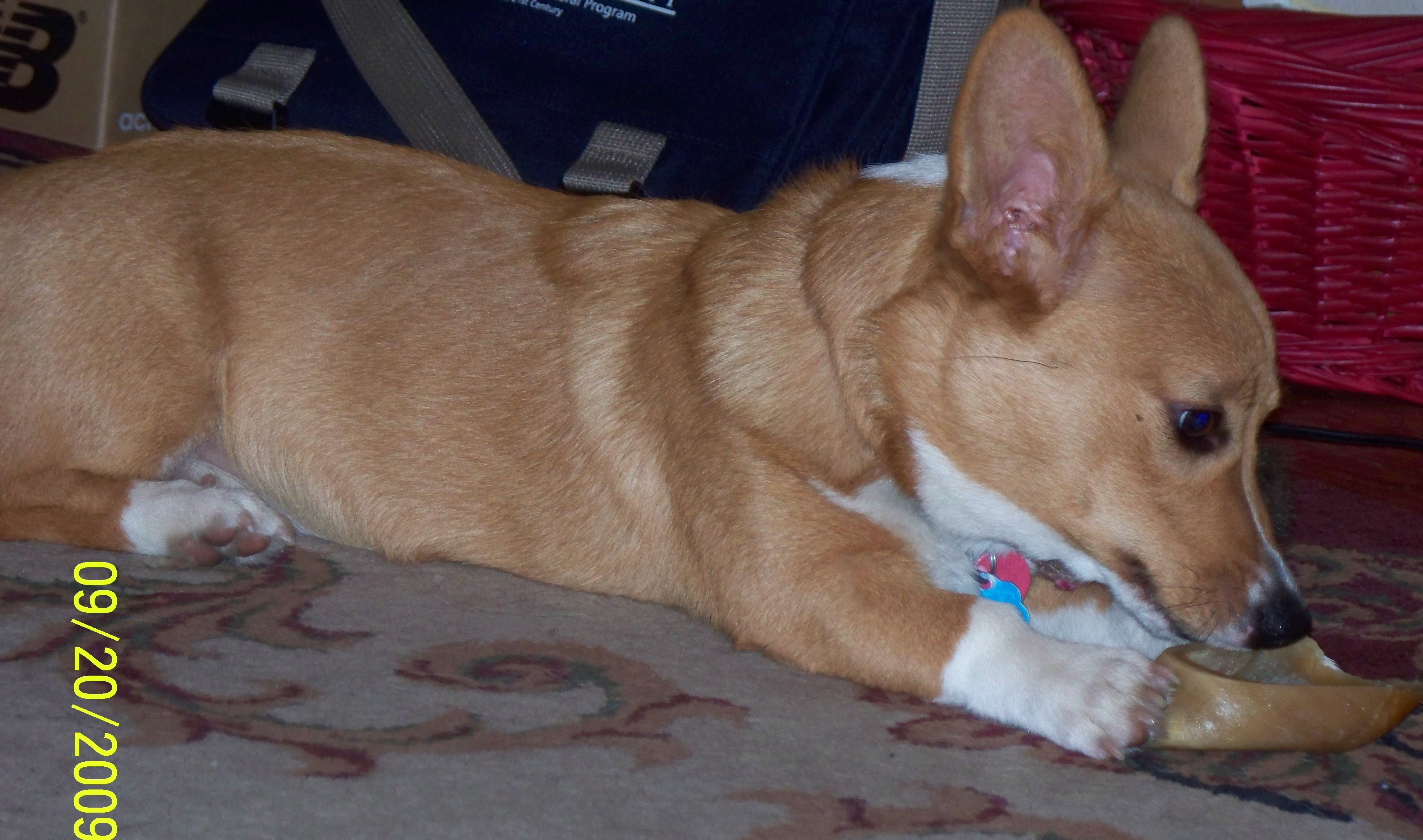 Stella turned 6 months old today, so I thought I'd write an update on her. She is growing every day and probably weighs around 17-18 pounds already! She is halfway through her first round of obedience-puppy kindergarten- and doing really well. She picks everything up really fast! She's my first Corgi and I just can't believe how smart they are! There's an agility class coming up, and I hope I can start her in some basics. She has so much energy and is… Continue