Yesterday was a little difficult - it makes me very grateful as well that one of my best friends is a vet tech....

That being said - Luna LOVES to eat! I got her some NylaBone Healthy Edibles Lamb & Apple Flavor Chews for Puppies. They're supposed to be gentle for their digestive systems.... I guess not if they eat them in like 5 minutes, along with probably a great amount of air while she gobbled it down.

She got it - and the next thing I know there's a stub left, which… Continue

I made Luna's available space in her crate a little smaller and set up an alarm for myself to go off at 12:00, 3:00, and 6:00 to take her out to prevent accidents in her crate. I chose an alarm sound that would prove, well, alarming enough to wake me from a deep sleep. I was a little worried how this would work, but knowing I am a light sleeper I wasn't too concerned with waking myself up - but rather with getting to Luna in time.

Luna did wonderfully though this whole week, we are at… Continue

It looked to us like everyone and their Corgis had a great time yesterday. It was our first time and we must have had confused looks on our faces because everyone wanted to know if we were new corgi parents.The games were fun to watch.....Limbo (how low can your corgi go), bowling and Mummy which involved a whole roll of T.P. We entered the costume contest and Tasha won 4th place in the cutest catagory. She won a stuffed white llama and a rope like frisbee thing. She loves the llama and…

Winter's Finally Arrived on the Prairies

My fall jackets got moved to the basement this weekend, and my snowpants came out of the closet.…

Earlier tonight my husband dug out the dog treats to see if he could make friends with Molly. We only buy the Canine Carry Out brand because Her Royal Highness KC will only eat those kind. And I swear she knows the difference between those bags and any other bag of treats.
Anyhoo, KC of course knew that dad had treats and was going crazy and wouldn't let Molly get close enough to get a treat, not growling or being mean just was all over the place and Molly isn't as out going. So finally I…
Continue

It's amazing to me the big changes in Sidney in the last couple of weeks. He's been able to walk a lot farther without stopping to rest and he's been just to happy! He has no problems now jumping up on the sofa or getting up on the bed with the help of a storage cube that gives him a step up.

He's been taking hydrotherapy for the past 6 weeks, and it has made his so strong...he's got such muscles. He used to hate the water, but now he takes to it willingly. He just had his final… Continue

Well we had termites. I understand it common here but geesh. We called Truly Nolan to get rid of them. They say it is non-toxic to pets. We are lucky to have caught them early. We didn't have to have house tented so glad of that. Sadly we lost 50 books from our book collection. We have been collecting over 30 years and have over 2000 books. Yea thats a lot. Gwenie was cute she growled at the ruined books that had bugs in them. We hovered… Continue

Hell of a year

Good things that happened this year;

3. Many many trips all over the northwest and to Las Vegas.

5 Moved into proper house with a yard.

1. Car broken into and purse and laptop stolen.

My corgi doesn't look both ways....

How can I keep my corgi from running right into the street if he's ever loose? He escaped out the front door twice and ran right into the street and into the path of oncoming cars. I don't live on a busy street, but it only takes one car for an accident to happen. :( How can I get him to move out of the way of traffic? 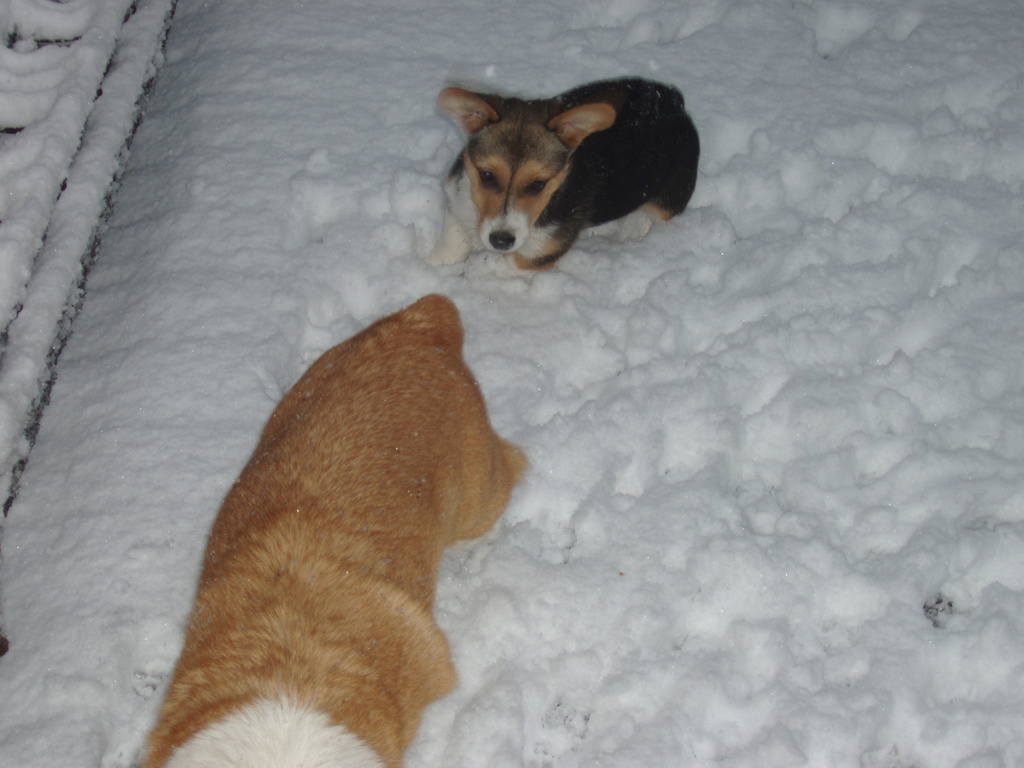 This morning we went out to find the yard was completely white and cold and something fluffy and sparkly was coming down from the sky. It crunched beneath my paws and when I lifted them, they were sparkly and kind of wet. Lily just walked in her usual way but I could see her paw prints behind her. She went out to her usual spot as if nothing was different. I tried to jump from paw print to paw print but her gait was longer and I ended up with a face…

I just wanted to say that I'm so impressed with the photos on this site. Do artistic people get corgis or do corgis make people artistic?

Ok my little Corgi pup is now 5 months. Im going crazy now. Since I have got her she has been eating her and my other 2 dogs poop! Yuck!!!! I have tried EVERYTHING.. The pills at PetSmart for all 3 dogs, Pumpkin, I even go out and sprinkle cayenne pepper over ALL there poops! Im getting grossed out now.. HELP

I am trying to connect with anyone who may be on this list/site that adopted a puppy from the 3/7/10 littler from the breeder named Paula Jenkins. Paula has re-married. Her name previously was Paula Baggett. The litter was being fostered at the home of a Kris in Fresno. I know Kris kept one of the puppies, but the litter had 4 or 5 more pups besides my Tasha.

They were all picked up before Memorial Day, which was the day we picked up Tasha.…

Ok, so now that we have narrowly dodged the bullet... I can talk about it. Nothing like closing the barn door after the horse has gotten out. Saturday we had a party at our house and that night Quin started to have diarrhea. I thought maybe someone had fed her something she shouldn't have had. No be deal except washing that fuzzy but every time she goes out especially in the middle of the night. But by Wednesday she still had it and it had turned bloody so I call my vet he tells me to give her… Continue

Quick question for the boards. Kali has been sleeping in her crate since I got her. Now all of sudden when I put her in her crate for the evening, she has started carrying on and really barking before settling down for the night. No changes that I can think of and I have checked her crate and nothing wrong in there. Any thoughts? She is teething but I have given her things in her crate that she likes to chew on. Thanks for any advice.

So my brother and I both have corgis.... He just took his puppy to the vet and the vet told him that rawhides dont digest well for Corgis?! He said she gave him a bone that was good for their stomach. And he doesn't remember what it was called but I was wondering if anyone else has heard that and if you do buy a certain bone for them, what is it called?

Yay! Peaches got "Photo of the Day" on November 8th! Awesome!!!!

Every tuesday and thursday I go home during my lunch to take care of my little Leo. My mom takes care of him all the other days while I'm at work because she works from home. Well, today is Tuesday. I love these days because I get to see him for a little while. During my lunch break I pick him up and take him to Papa's house (my boyfriend John). He gets to play all day with him. Until I pick him up after work.
This morning I took Leo for a walk around the neighborhood. We…
Continue