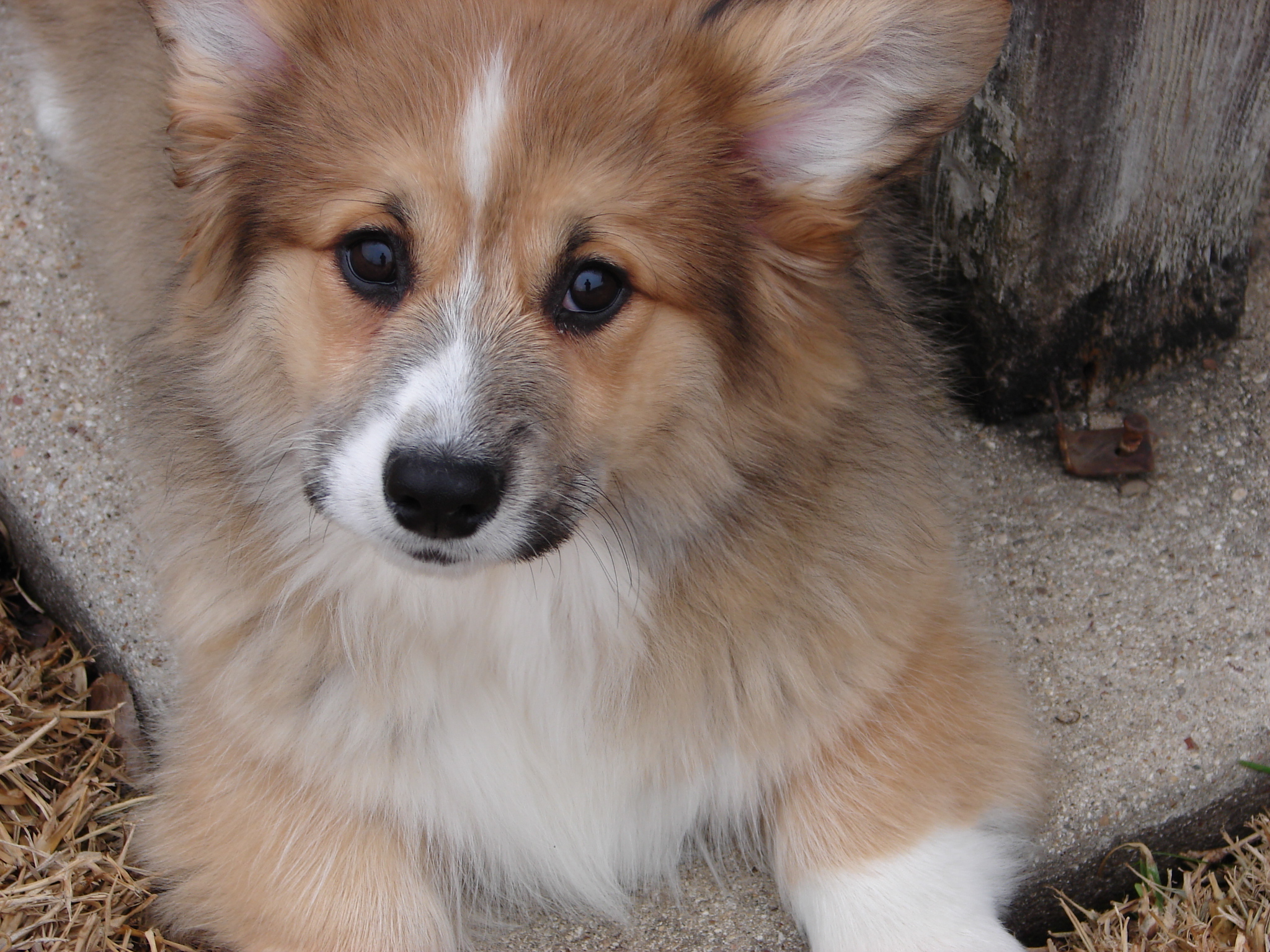 We just made an addition to our family! A sweet little 3 month old Fluffy male we named Joey. We are so happy to have him in our family. And Sadie loves her new little brother! Check out our page if you would like to. We are at Debbie and Sadie Mae. I put a ton of pictures of his first days with us on a slide show.

Anybody want to be a breeder? Plus bonus puppy pictures!

They are all doing well; with such a large litter I am extra vigilant but so far weights are looking wonderful.

Just in case anybody thinks it might be fun to be a breeder, here's what every day has been like since last Friday (and what I do is not in any way unusual for good breeders - I was "trained" by someone who has done this for 30 years):

- The puppies are never left. They have at least one human next to them 24 hours… Continue

Happy tails to you!

We are having so much fun and staying very busy with these new pups! We lost a beautiful male tri on Fri. I think Livvy stepped or laid on him...bless him poor baby! 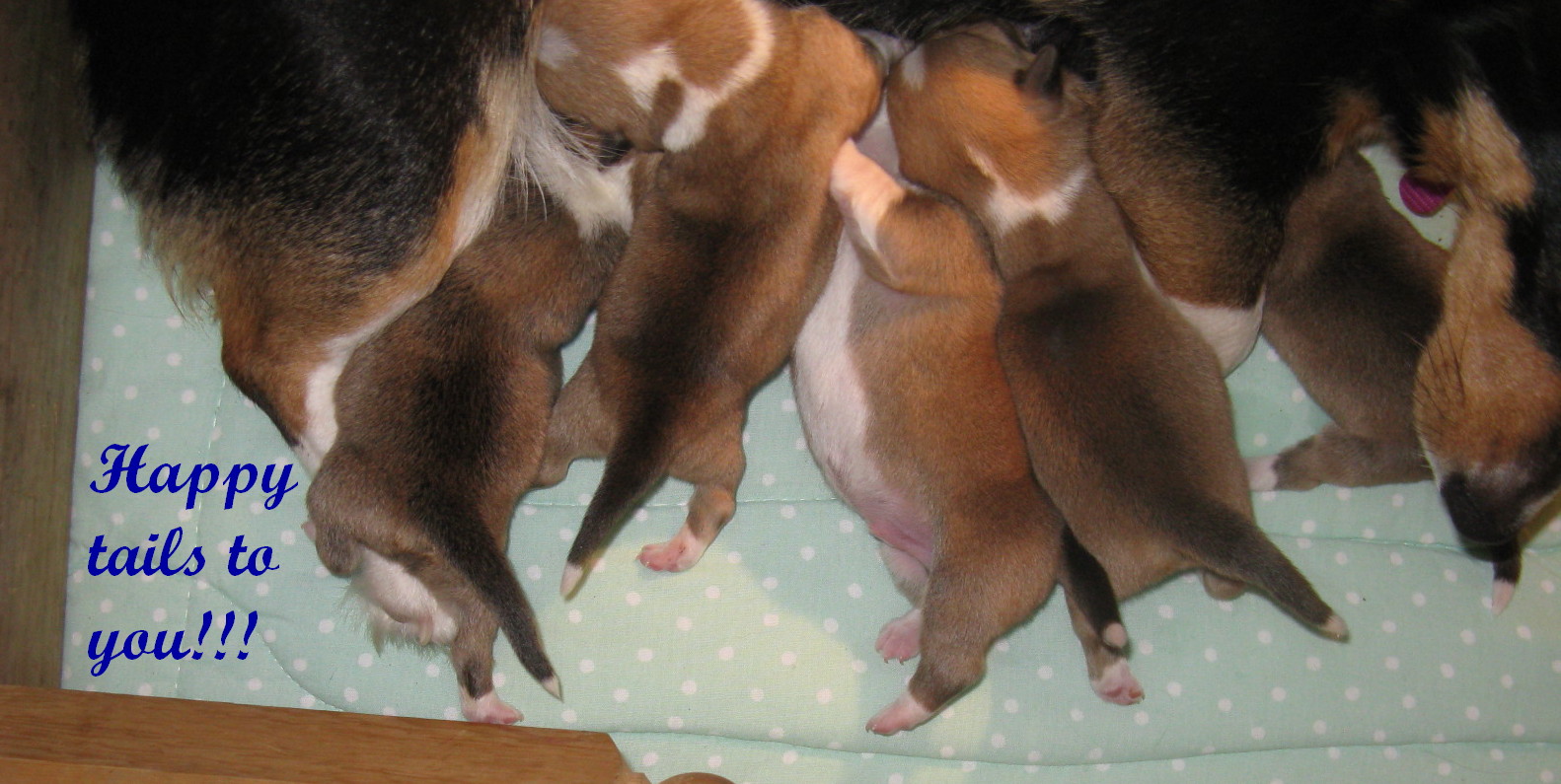 These guys are changing daily and so fun to watch! I am thinking we will now end up with 3 red and 3 tris!!!! Time will tell. They are already switching their cute little tails all over! And talk about agility...these pups contort their bodies every which way to get some of momma's… Continue

I've been wondering for the past few months-- which dose should I give Madoc? He's been on the smaller dose for dogs UP TO 26 pounds. I have a feeling that his weight will always hover around 26 pounds. If your corgi is about 26 to 28 pounds, which dose does your vet recommend and you use? Things on the borderline are troubling! I don't want to use too strong a dose, but naturally I want him protected here in Virginia where mosquitoes can be monsters in the summer. Thanks for any advice!

I just posted a video pf my yard. Nutmeg never destroyed the yard...until Superstar (love you Alondra) came over. Since Cinnamon has come into her own...my yard has taken such a beating! Now, I live in Florida...I am a novice in dealing with the sawgrass....however, my dogs would eat the grass forever. They NEVER puke it...they just dig it up and eat it. A neighbor said that they might be missing something from their food...a nutrient. They both eat Solid Gold all wholistic food. HELP MY YARD!

Brando finally made it home after 48 hours spent in the Houston airport, and Sky gave him a nice big bully's welcome! I never even thought to be worried about Sky, I was concerned with how Lyla would react. I introduced the dogs outside and Lyla loved him instantly, but Sky just acted like he didn't exist. When they came in Brando was sniffing around and started smelling a sock on the ground. Sky instantly snarked... apparently it was "his" sock. So far Sky is telling off the puppy for… Continue

I love to run. It is was got me healthy and part of the reason I picked a corgi for a first pet. So the first time I started to see if Harp would run, she was NOT having it. That was a while ago, recently, mostly this week, I tried to see if Harp would run with me and she did. It was great. Now we are really building up endurance for hiking. I can't wait to get pictures.

Rosie’s been limping lately and the vet says that she needs surgery on her left hind leg. Apparently Rosie’s patella/kneecap moves around because one of the tendons holding it is loose/stretched. I asked the vet if there were any non-surgical solutions to the problem, and he said “no”.

One of the vet technicians says that he doesn’t actually shorten the tendon itself, he uses “other tissues” around the tendon and sutures “in a zig-zag pattern” to reinforce the tendon. The sutures… Continue

Yesterday late afternoon Griffyn got stung by a bee. He's okay! But... I thought it might be a good idea to post a link to a website that tells what to do if your dog gets stung once, or multiple times.

And I also want to point out an interesting thing about the bee that stung Griffyn. It was dead!!! Apparently a bee's stinger can still "do it's thing" even after the bee is dead.

Poor little guy.... he was curious, of course, and as soon as his nose got up against the bee,… Continue

We ran out of Origen puppy formula and it was time to switch to adult food anyways. I know everyone says that the switch should be gradual, but Shiro eats a large variety of meats along with his kibble (not at the same time) so I felt it wuold be OK to start a new food right away.
He usually gets cooked chiken, ground beef or turkey, sometimes pork every other day, and when I switched from Innova to Origen he didn't have any problems at all.
Anyways, the store near us doesn't have… Continue

How many "dog issues" can one person have in a day? Apparently a lot! The new puppy got stuck in the Houston airport on his way to Oklahoma because Continental decided to cancel ALL flights for today even though it wasn't snowing or icing or even raining. It didn't start even raining until after her flight was supposed to land. I was worried sick about him all day, but luckily I have an uncle who is a pilot for Continental and when he landed in Houston tonight, he went and check on Brando for… Continue

So I came home today to a baby girl with white foam around one side of her mouth. She looked like she had rabies LOL, but I knew she didn't. After settling her down and looking her over, I found a back tooth super loose and the gums really swollen and kind of gross looking. A quick trip to the vet to find out that she's a bit abscessed on both sides of her mouth. Basically her bottom tooth is poking her sore gums on her top.

We got some antibiotics for the infection and we're home.… Continue

After spending most of the night awake and the other part sleeping on our bathroom floor. Livvy delivered these beautiful pups between 7 and noon...I'm not 100% sure she's done! 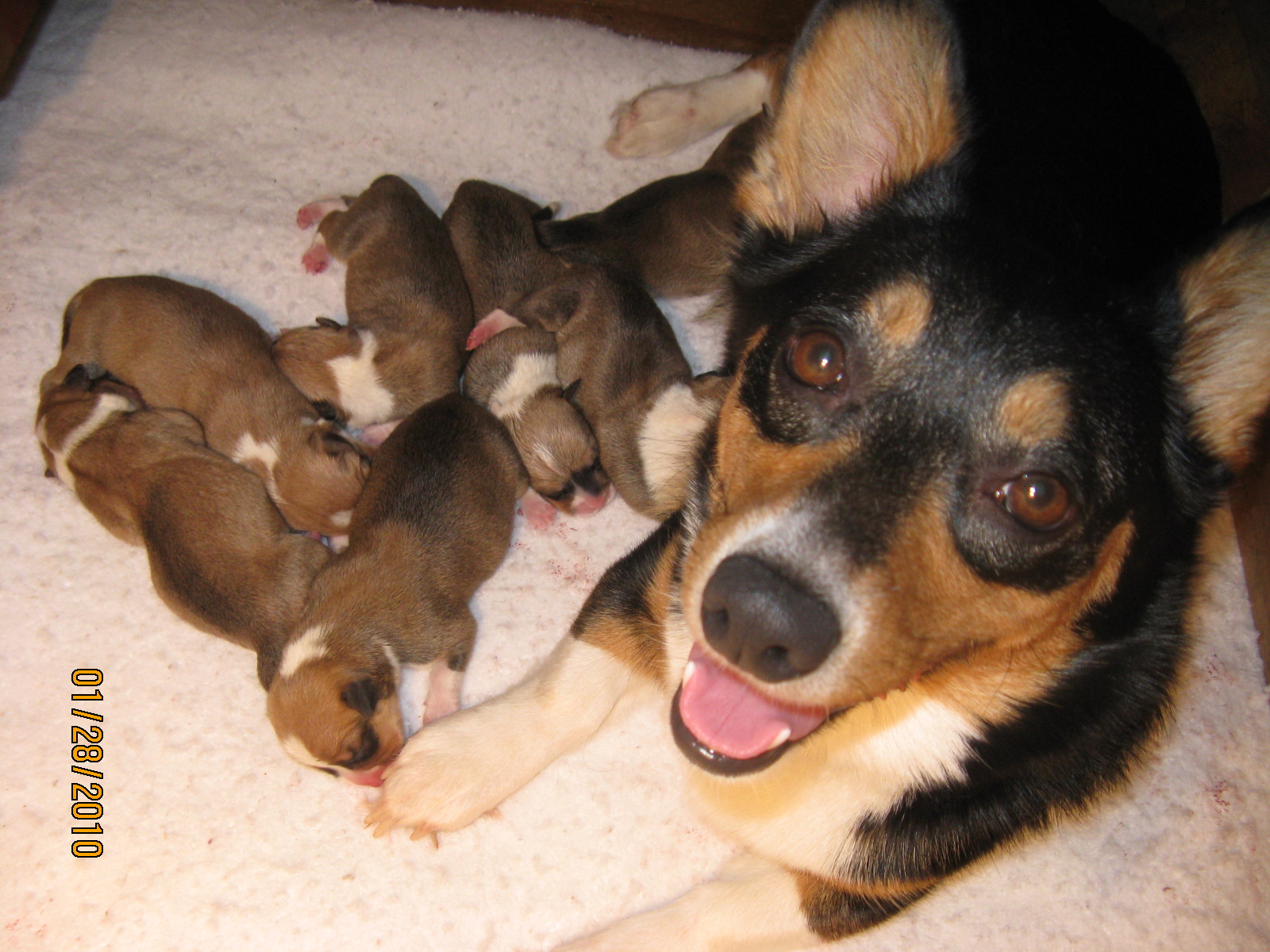 Wynn got to see his babies too...mom didn't really like it!

Several months ago we had a discussion on this. Today when I let my pup that I'm rehoming out I watch her closely since her old owner says she runs...I couldn't find her for a bit and when I did she was chasing a mouse and having a great time digging in the deep snow for it!!!! Her mom is a great rabbit dogs so maybe she gets it from her! 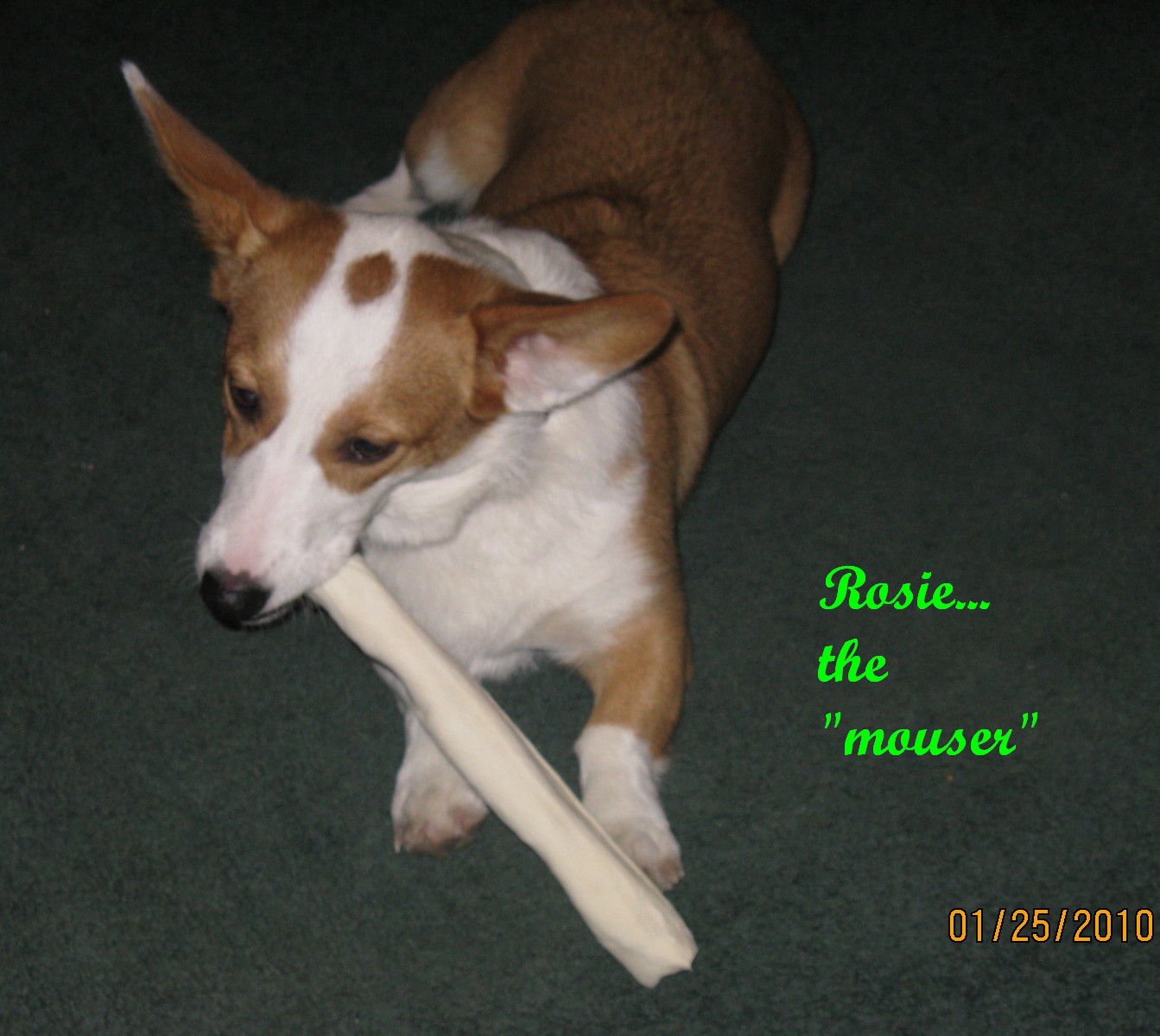 My dearest friend (who introduced me to corgis) will be going out of town for a week and I have offered to watch her corgi, Emily, for her. My dogs normally get along very well with her. They always hang out at the barn, go on car rides, etc. But I haven't had her at my house unattended without her human mom since I've gotten Tigger. Molly and Tigger can be real bullies (esp. Molly cuz she is the brains and Tig is the muscle). There was only one incident that was bad, and it was that… Continue

So I was driving home from school...and I see this lady walking her dog on the road "connecting" toward my cul de sac and I see that it's a corgi.

*looks at the corgi from behind* and I'm thinking..."Aww...that's a cute corgi...that's cool that there's another corgi owner in my neighborhood.....
*passes by to look at the side of the corgi* gosh....it looks awefully a lot like Ein...It can't be Ein. He's at home.
*slows down from 25 to like 5 mph and look at the front… Continue

I stumbled upon a group on Flickr that, as a group, will be photographing their dogs once each week in an effort to:


"create that one photo each week of your chosen dog that either stands out, signifies something special in your dog's week, or is a unique approach from your other photos of your best friend. Push the limits a little, do something different, be creative, challenge yourself. "

Having some issues with behavior (biting mainly)

Normally you see my better 1/2 posting (Rebecca), but I (Kevin) am posting today to address an issue we are having with our 10 week old Pembroke "Buddy".

I am blessed to be able to work from home most of the time, so I have been able to take an active part in his life right now. I have him going outside every 2 hours for a pee break. Followed by about 20-30 min of company and then I crate him for another 90-120 min until its time to go again.

This has nothing to do with Corgis or even my household, but I cried a little this morning when I learned that the glorious mare Matine from Blue Hors farm was euthanized yesterday at the age of 13 after breaking her front leg in a pasture accident. She was only 13. She was retired after hurting a tendon getting off a van, and was going to be a mother soon.

I know there are some horse lovers among us. Grand Prix dressage competition can be a bit dull, but exhibitions are beautiful… Continue