Hi everyone. I just joined, this looks quite fun. I have a Male Pem Corgi and he is a great pal to our whole family.

Hi everyone. I just joined, this looks quite fun. I have a Male Pem Corgi and he is a great pal to our whole family. Continue

ears are almost standing up...

I love cats, well most cats, most of the time. But this week my mom's evil young grey cat scratched my puppy in his eyeball. Now I have to cope with the 3 month old puppy possibly losing his eye, not to mention the super-fun vet bills for emergency work. So far everything is ok, but only time will tell if some complication comes up.

I am at a loss of what to do with the cats other than keep them separated from the dog. Its bad enough he wants to play with them and they want nothing… Continue

I had my Maggie spayed yesterday (friday) and I am really concerned about it. First her incision is over 2 inches long. All the other dogs I have had, including my last corgi, their incisions were never over 1 inch in length. Secondly, they shaved half her body. She looks like a chinese crested which I am extremely upset about. I know that they needed to shave her but not as much as they did. She is in so much pain and can barely walk. She keeps looking at me with a look like what did you do to… Continue

Does anyone have any tips on training your Corgi not to bark? I have a 6 month old male Cardigan and he feels the need to bark at anything that moves or makes a sound when he is outside. He will do this day or night, but night time seems to be worse. When it's dark out he will often bark when there is nothing even there. He goes into this guard dog mode and once he begins the barking, nothing else matters. He's being a great guard dog but that's not the behavior we're looking for. We live in an… Continue

Luna is my baby corgi (9 weeks). She's the cutest pup ever! Loves her toys and everything, and we're working on the potty training. One ear is now up but we're waiting for the other one.Right before she goes to sleep she'll run around the room really fast, like she's herding us and will come to a rushing stop and plop over fast asleep. She's still a puppy so she sleeps alot, but when she does play, she gets in "attack mode" and wont stop til she's tired. I'm looking forward to having a happy… Continue

Can Anyone Help? (Biting Corgi)

My New corgi pup tends to nip at us everytime we want to bring her inside, or everytime we pick her up. She is 9 weeks right now and this is my first corgi I've owned. I was just wondering if this was just regular puppy behavior, corgi behavior, or is she trying to tell us something... what should we do? (You can tell that its different from play biting) I dont believe in hitting a dog or any animal.

Koby is doing good! He is almost 11 weeks and now knows paw, sit, and up! My husband has been working with him. He has such great personality! Today we took him for his third set of shots and he cried!!! I felt so bad! His brother Dyllan went too and he also cried!! Other than that everything went well. They are both healthy and happy! In may or June I believe he will be getting fixed! We are going to have that done with his brother so they can be there together. Korie the shepherd puppy is now… Continue 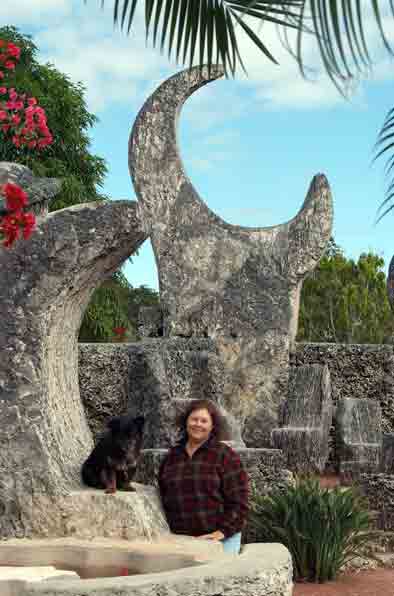 Bear, Tammey, and I returned from a trip to Florida a couple of weeks ago and I have finally found the time to share a great experience with our Corgi friends. (I hope that none of my Texas Friends will make much to do about the fact that the Shiner Brewery Blog was posted the day we got home but I am a Texan and must set my priorities.) We had the chance to visit the Coral Castle in Homestead FL and it was better than I had expected it to be. I first… Continue

My baby just turned 1 a couple of days ago! Seems like only yesterday we brought her home, our little bundle of joy. A year later, she is still the most stubborn, fiesty and lovable creature I have ever known. Things that used to bother her, like the kiddy pool and the hairdryer, are now sources of entertainment. Things like the ceiling fan, plastic bottle and tongs absolutely creep her out! She has been an absolute joy to us and could never imagine life without her.
School will soon be… Continue

RE: HOME ALONE..What worked best for me and my dog was a "play pen" I bought it through www.petedge.com In fact, to this day when I leave Paddy home alone he prefers his pen. Its much bigger than a crate. He has room for his bed and toys and he can't hurt himself. And he has never tried to escape. Here is a link if you would like to check it out. http://www.petedge.com/ProSelect-Ex-Pen--24-quot-H--with-Carrying-Case-ZW46824.pro He has the 4x4, 24 inch high exercise pen. I hope this info is… Continue

Although no one likes to do it, I think it's a reality to admit that from time to time we all have to leave our puppies home alone. Whether it's work or school (or both, for us!), life calls us out of the house to places we can't being the dog. So herein lies my frustration. Milo is still very young, only 9 weeks as of posting, so I don't trust him to have run of my apartment just yet. I don't think it's safe for him or my property. I have been trying to corral him in my kitchen, the safest… Continue

So my husband and I made a trip to the local humane society this past week, and we were so sad over the amount of pets being turned over because of the economy! It breaks my heart that people have to surrender their pets due to the inability to feed/care for them. Yesterday I saw a video clip on CNN about a place back east that had started a pet food bank to coincide with the days that the regular food bank was opened. I thought to myself...I wonder if I could do something like that on a… Continue

This blog is based in Houston, but the stories touch my heart and I'm sure can be appreciated by anyone.
http://www.chron.com/rescuevolunteer

Dog reunited with family after 9 years

It's Friday everyone! Hope your upcoming weekend an awesome one! I just read some happy news here, thought it'll brighten your day too. Microchip saves the day :)

Rescued Dogs, are the Best Dogs!!

We have two corgi mixes that were both rescued from the local animal shelters. Cowboy was 2 when I adopted him. I must admit when I first walked through that pound I walked right past the little guy, never even noticed him, he was so far back in the kennel. When I finally did see him, it was love at first sight. He was so scared he clung to my leg and jumped at any little sound. The shelter assistant tod us he was skin and bones when he came in and it was evident that someone had been abusing… Continue

Wow hard to believe that I have had Maggie for almost 4 months now. She has gotten so big I can't believe it. She has finally gotten her potting down and has become the queen of our house. I have to tell you I, keep her busy. I take her for a mile walk twice a day and she crashes at night. I really want to get her into agility training but have yet to find a facility close to me.
Tomorrow she is getting spayed. I am nervous, I don't know why because I have gone through this before. I know… Continue

Yet another crosses the bridge

Deion is a handsome tri boy that aged very well. At 13 he looked as dapper as he has all of his life. His coat shown with a grand sheen in the sun and his eyes sparkled continuiously. He is a grand boy, loves everyone he meets, is good with children and other dogs. He was a mild mannered fellow that could go anywhere and know how to charm everyone.
Just over a year ago I noticed a minute difference in his way of traveling. I continued to watch but had an inkling that perhaps DM was the… Continue

And apparently the groomer there breeds and shows corgis!! so we were very happy to meet her and she was happy to meet Pooka, whom she called Peanut, because she apparently looks just like him! ("Peanut" is also the common name for the runt of the litter)

I told her, we of course think Pooka is the prettiest (I never can see what's so special about the corgis you see at shows, none are as pretty as Pooka), but asked what she thought. I just never knew what's a fault and what a show… Continue

Hello Fellow MyCorgi Folks,
Sorry for the lack of activity on Charlies page. Things have been really rough lately (as I'm sure it has been the same for others as well) and I haven't been able to post anything new. We lost our place due to a foreclosure and Charlie is no longer living with me. :(

She's getting big though, and somehow got some spring in her step. I've seen her jump up on a big bed and fly around on the couches! How she does it with those little legs, I'll never… Continue