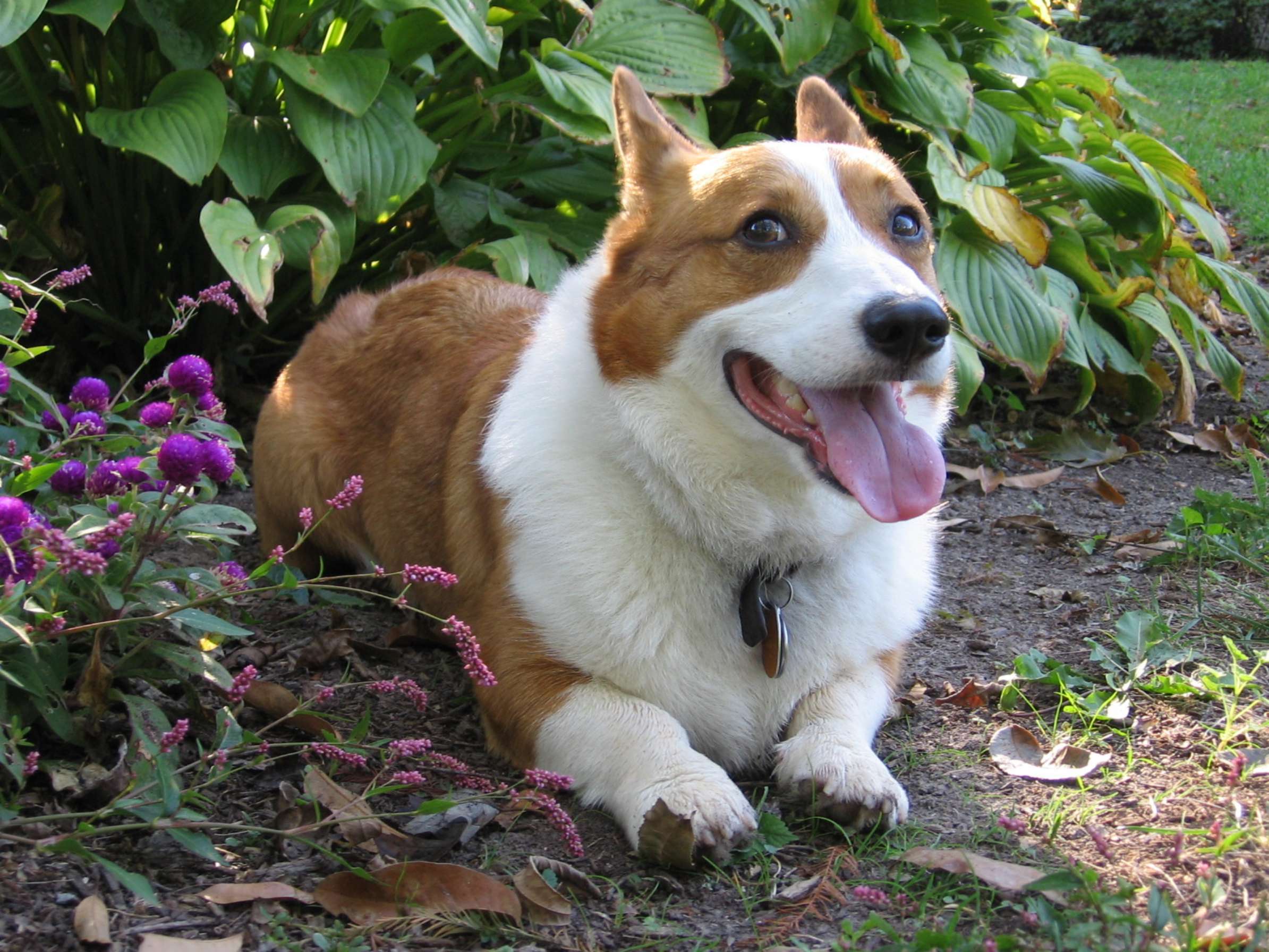 Hello,
I have never posted a blog before but here goes...
Writing to brag a little about my corgi boy "Clive". We went through 2 obedience classes since I got Clive, a rescue corgi, in September 2007. This past weekend he took and passed the Canine Good Citizen test offered through the AKC. It's a wonderful feeling to have a well behaved dog and Clive and I have bonded tremendously through these classes. He does all the work, I just hold the leash!

If you have not taken any… Continue

Paws in the Park Fundraiser

Hi..Sidney here again!
Today was such an exciting day! My people got up extra-early for a day when they don't go to work. Usually they like to stay in bed and get grumpy when I wake them up to play! Anyway, we got up early today and took me and the two old dogs to a BIG park! And there were SO MANY people and dogs there! There was so much to sniff that I was going crazy...I was in heaven! My people met up with one of their friends, who have two adorable and very well behaved beagles, and… Continue

Changed my pups name, (he doesnt know it anyway)

The pup is still at the breeder! I since decided to change his name to "Cheez-it". I also was given links to two videos of the pups, however when I put them here from Youtube they did not play. I believe it is because I sort of bypassed their "disable embed" option with some html trickery... Well they can be seen at youtube at least....

Our Day at the Park

OK so me mom said we were going to have a fun, fun, fun day. i was soo excited. i didnt know what we were going to do but she look happy so i was lots happy. But then she put me in the car:( She lied to me! Cars are NO fun. No way jose! Abby thinks they are a blast so i hide behind her. Me mom calls be a baby but what can I say I is only 6 months!. Well it turns out she wasn't lying after all. After that horrible car ride we got out and we got to this… Continue

Hi Everyone,
We have made some recent changes to www. corgiclothes. com including new designs for our shirts! Check it out and let me know what you think. 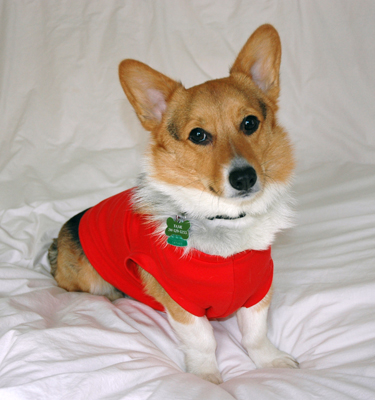 Extra Extra!! Bailey's ears are Up! ThEY ARE UP! 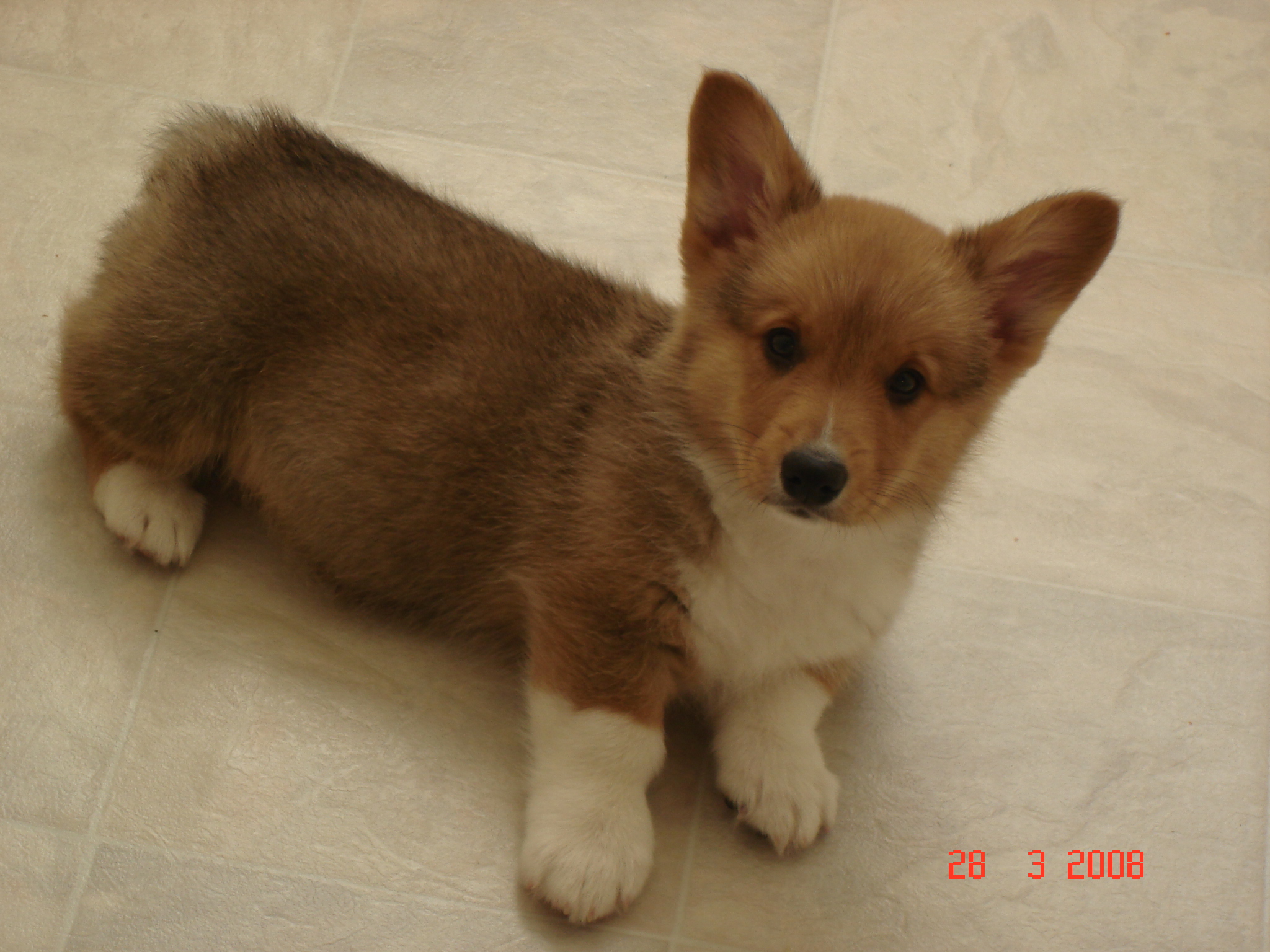 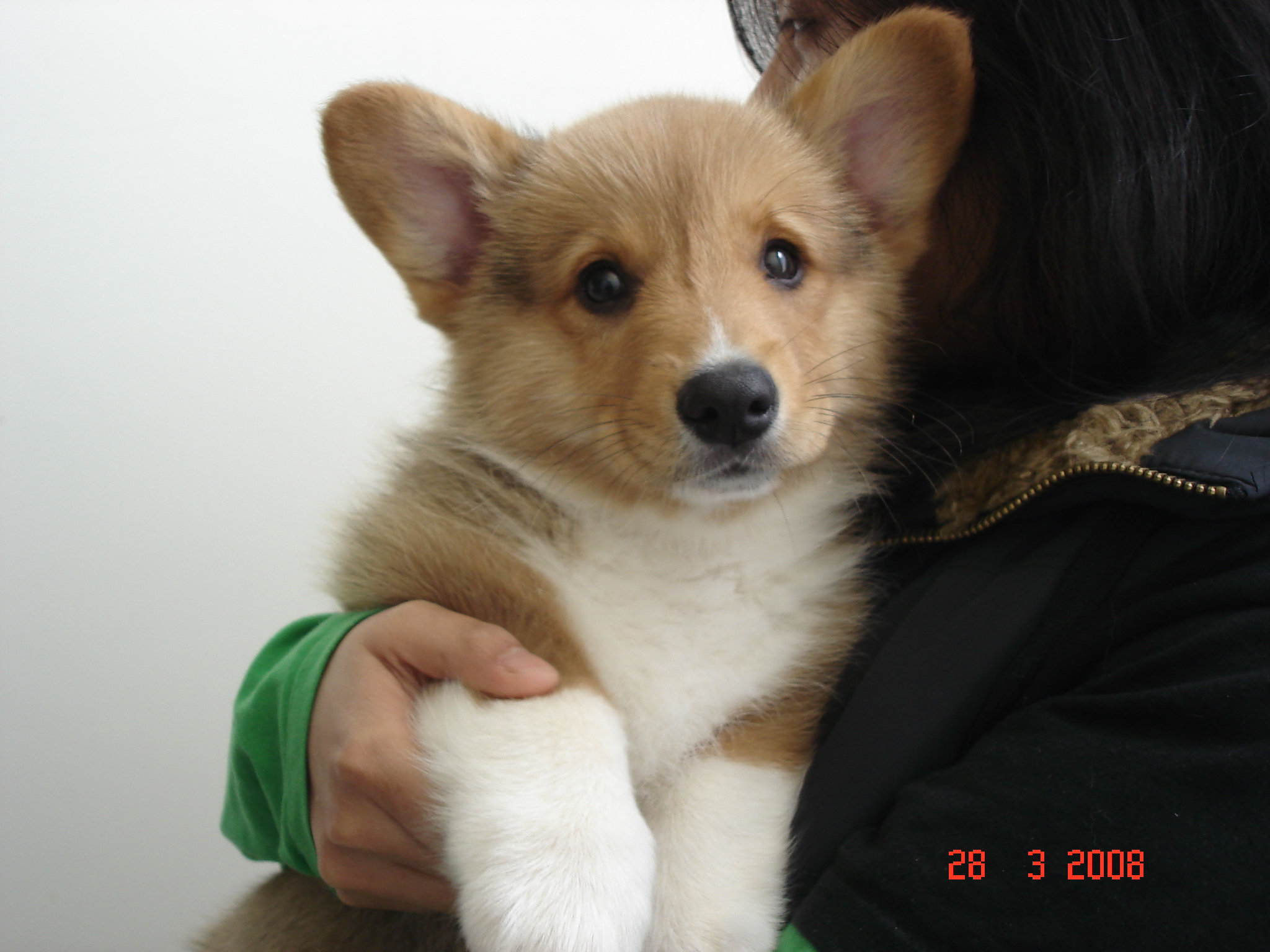 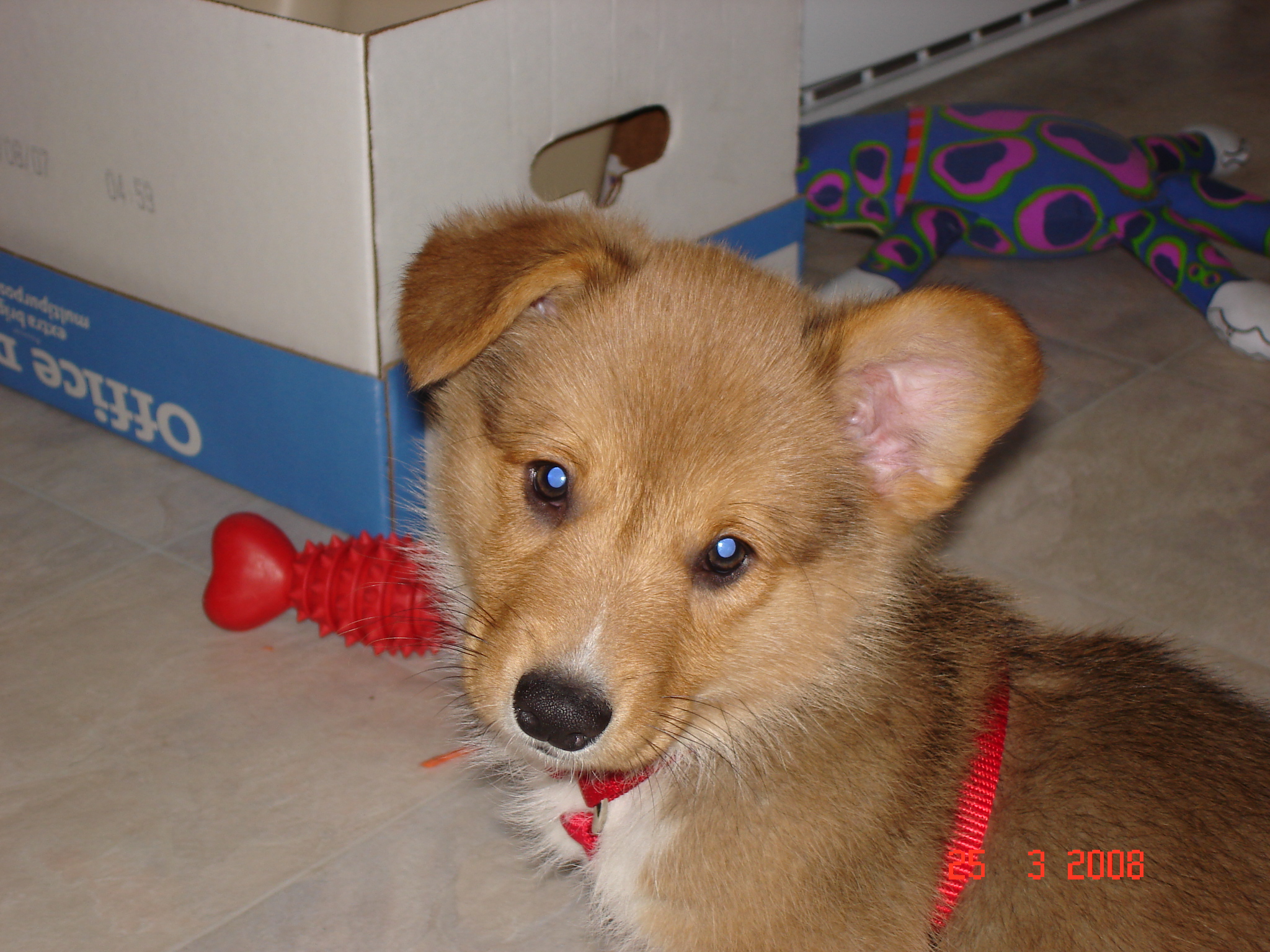 Bailey's ears are finally up! =P I was only able to get three pictures of his one ear up/one ear down (this stage only lasted two days for us) , but of course in the mist of uploading pictures, i accidently deleted one of them, so i have TWO! All in all, it happened quite fast. =P He looks like quite the fox with this ears up. His toepads are also… Continue

8 weeks old, our first vet visit, and our first trip to Petsmart!

Layla and Hunter were 8 weeks yesterday! We celebrated by taking them to the vet. They got to meet lots of friendly people and another (much bigger!) dog in the waiting area. When it came time to move into the room Layla came along fine but Hunter stopped at the door and pulled on his leash. He did not want anything to do with that room! It was strange since they've never been to the vet before, but I guess he could just sense something. Anyway all their tests came out fine. They got their… Continue

I just want to thank you for giving me great advice, but in my first blog I want to tell you about my dog.
My dog is 50% golden retriver 40% saint bernard and 10% German shepord. My family just says that she is a german saint retriver. Ha. She is now 1 1/2 years old and has the most loving family she could ask for. She lives in a single family, ranch style home in Connecticut. She has a huge fenced in back yard that she can run in and we live near the… Continue

My first corgi was born!

What a great news! On Wednesday 26th March my little corgi was born. Along with his 3 brothers and 3 sisters! It was quite hard, the birth was lasting very long, so the Caesarean section was needed. I hope that everything will be OK, the breeder is quite sure that both the mother and the pups are doing well. I'll visit the breeder in the middle of April to see my corgi for the first time. I'm so excited!

Gizmo met my boyfriend's cats this "weekend." They did surprisingly well. We picked Gizmo up in the afternoon, and took her over to his house, figuring she could have a nice romp around his back yard. Dennis decided it was time for Gizmo to meet Patches and Bagherra.

We let Gizmo into the "cat" room. The cats weren't much amused. Bagherra did his best to look disinterested, while Patches puffed up her tail and took a swat at Gizzy (taking a chunk of fur back with her). After that,… Continue

Have a great weekend!

Oh my goodness, I think my Mommy is crazy!!!

Mommy is losing it, seriously. Last night we went to the doggy boutique in town and she bought me a new collar. It is pink, with rhinestone letters that spell out my name, “GINNY” and a little princess crown in pink and white rhinestones. It is so girly and sparkly! What does she think I am, a little wussy poodle or some sort of teacup doggy? No way! I am a rough and tough corgi and I am NOT a wimpy little sparkle-wearing princess. Not much I can do about it though. Without opposable thumbs I’m… Continue

Visiting my Corgi breeder this Sunday!!

My wife and I are visiting a corgi breeder in Columbus, OH this Sunday, we have been communicating with her since before she knew her dog was expecting. We live about 2 hours away and the weather hasn't been cooperating with us very well and this is the first chance we really have to meet her and her dogs. She is expecting the new pups to be born next week!!!! Really we could not be more excited. I started out talking to several breeders, a few of which live much closer to us. I found nothing… Continue

Hello...Sidney here again! It is still "spring break" for the human kids in my family, which means they get to hang out all day with me and the old guys. I love it! It means extra walks! Today we drove to a forest of really tall trees called "eucalyptus" trees. They smell funny. But there were lots of trails in this forest and we climbed up really high! I'm a short dog, so everything seems high to me, but this was the highest I had ever been! On this hike we only met a few people, but they all… Continue

We are awaiting confirmation from a rescue here in Houston about a puppy we are hoping to adopt. She is a brown and black Corgi/Dachshund mix. We are very excited! We have been wanting to get another Corgi, but we wanted to go the "rescue route". She was left on the side of the road in a box with her brother. She is only about 11 weeks old and she is such a cutie. Say some prayers we get to bring her home! Duke will be so excited to have a lil' sister to play with.

I picked up Roscoe almost two weeks ago, on 03-14-08. So far it's been a lot of fun and a lot of learning for the both of us. When I got him, I was living with my brother in a home with a large fenced backyard, but this past weekend moved to my own apartment. The apartment area itself is pretty big (two story townhome), and we're going out on the leash when he needs to go out to potty.

This is my first inside dog, and my first time dealing with a puppy. So far it hasn't been too bad,… Continue

Not much to say at this point. I can visit my little guy later this month and pick him up 2 weeks after that. I am very excited. I will keep a blog of how he progresses with me! Any tips for a new Corgi-owner?

I've never really written a blog entry before, so please bear with me. I figured this would be a good way for our friends and family back east to keep up with us after the move though, so here goes!

I finished up grad school in August 2007, and we decided that it was a good time to adopt a dog. Ty, my husband, had been adamant that we didn't have time to devote while I was still in school and both of us working full time. While I agreed, I still wanted to just do it. I'm so glad we… Continue

Well today I had my first bossy corgi incident. I was out walking with baxter, letting him romp around. He stumbled upon a pile of dried horse poo in the backyard. Not sure why exactly it was there...but I digress. So he grabbed a piece, I told him no, removed it from his mouth, and picked him up. He immediately started showing attitude, growled and nipped me in the face, it wasn't a hard bite but a nip all the same. I tapped his nose lightly and gave him a firm No. I brought him back into the… Continue

We are back from our Easter trip and all settled in! Hunter and Layla (we finally named them!) did SOOO well at my parents' house! They were wonderful about going potty when we took them outside or on the potty pads. Only one or two accidents. And no accidents in the crate during the car rides. Unfortunately this morning they seem to have forgotten how to use the potty pads...but I know it's just going to take some time and work! They're already shaping up to be smart, sweet puppies. Layla… Continue