No New Puppy For Me This Weekend

Unfortunately, I just got an email from my breeder that Dr. Gonzo won't be ready for at least a week from saturday. *sigh* I understand completely, I would much rather have a healthy puppy than not. I was just soo excited for the weekend. Ah well, next weekend it ish.

The vest makes the difference!

So today we had a very fun time! Grandma and Grandpa moved back from Germany into their old house and mom brought me over to play with cousin Apex and go to the lake!

Grandma thought I was adorable and gave me a bag of handmade peanut butter doggy cookies from a special German pet store! mmmmmmm! She was a nice old lady and couldn't get enough of my tricks...

Shippo's First Day on the Job

Shippo really enjoyed his first day at work today! I work at Camp Bow Wow, a doggy daycare here in Denver, so once I finally got Shippo his Bordetella vaccination, I was able to bring him along! Most of the day, he pranced around, nosing for attention from anyone in sight, but in between that, he made friends with a few dogs, including Tucker, the Chihuahua mix, and Annie, the boss's mutt dog. He also greeted a few customers who came to pick up their dogs. All in all, I think he had a good… Continue

Okay so we have been walking in the neighborhood past the school where they cut the grass but leave behind the clippings. Well Lance just thinks that is the best treat ever! He will keep eating chunks of it. It is like he cant get enough of it! I do notice that his poop has been firmer since he has been eating the chards of grass.

I have heard that eating grass settles their stomach and can make them throw up. Lance does not throw up from eating grass and never has. Lance has eaten… Continue

after a long wait...Trice is finally home with us!

Trice is finally home with us! If you don’t know, we purchased Trice from the breeder in August but because we were in the process of moving to a condo this past weekend, we decided to just officially bring him home when we move. We did take him home for one weekend in August though (shh don’t tell our apartment complex – dogs not allowed)! So, the month-long wait since then was worth it. His ears even perked up while he was away (I wish we were there to witness it ourselves). We missed him so… Continue

~_~
I accidently left Didi in the crate for 10 hours yesterday.
When she is in the crate she never makes a sound because it never gets her anywhere. I had to go pick up my parents from the cruise terminal early in the morning so we went out, had breakfast, went out again and she went right into the crate. Ran to the cruise terminal, picked up the family, came home, unloaded luggage, fed ourselves, more family came over, stories and tasting things and gift giving. We left at 7am.… Continue

Shippo's in the Fluffy Power 2009 Calendar!!

OMG I'm so excited!! I came home last night (well like midnight) from this cool dog party at my boss's house, and checked my e-mail. I had an e-mail from Karen, who makes the Fluffy Power Calendar. Shippo's going to be in the 2009 calendar!!

I had sent in some pictures of Shippo like a year ago, hoping they'd make it into the 2008 edition. Unfortunately, he didn't make it in last year. But he got chosen this time! Woohoo! I can't wait until she releases it!

Our thoughts, tears & prayers are with you. Reflect on your wonderful memories during this difficult time and remember Riley was blessed with a wonderful family and you with him.

Le-Le has been part of our family for 7 months now and we are having a wonderful time. Each day brings her more out of her shell. She comes to life at dinner time, and right before bed. So funny that she wants to play with her toys then, runs between the bed and other rooms. She steals a sock, a dish towel, napkin out of the laundry basket and runs outside if the door is open, another room or under a sofa to have a quick chew. She notices the leaves falling & tries to catch them. She is so… Continue

So I noticed today that Reese has lost her first baby tooth! She went to the vet for her last set of puppy shots and the DR said she'll be losing her teeth soon since he felt them wiggling. The next thing you know... I see a little hole and a missing itty bitty tooth! Our little girl is growing up way too fast! I guess she'll have a visit from the doggy tooth fairy... I wish I was able to catch it but they're so tiny I'm sure she swallows them or something. I'm excited to know that she is now… Continue

The worst day of my life RIP Riley 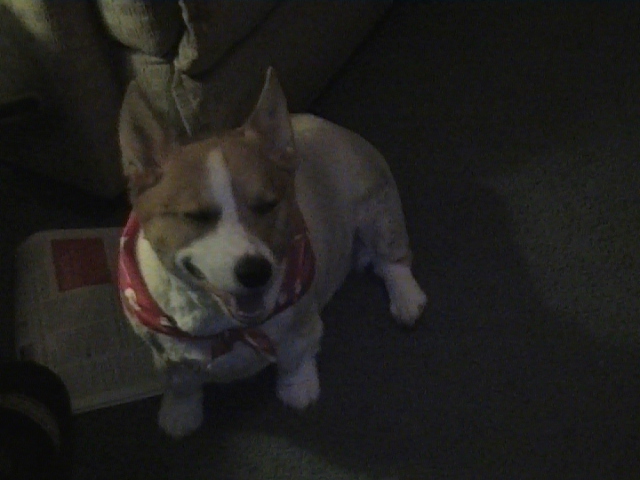 This photo makes me laugh its funny when you snap a picture and the animal blinks lol just like a person...Also he looks like he is smiling

There is nothing peaceful about putting your loved one to sleep. The vet couldn't believe Riley has made it this far. He couldn't find a vein to put the shot into because there were so many sores. God it was horrible! Riley cried as the shot went in I just held him tight and kept telling him he was the… Continue

So, Jack's trip to the vet went great. :) He was a big hit. I found out that he weighs 22.1 pounds! I was so surprised! He doesn't look like he weighs that much.. Is that healthy for a five month old? Apparently the vet thought so..

Anyway, I've noticed that lately Jack has become rather food aggressive. We knew that our other dog, Kujo, was aggressive around food, but Jack had never been. I was wonderning if he could have learned that from his 'sister.' ?

I am a brand new corgi owner, well I will be in a week and a half when I can take my baby Franklin home. I have been doing research for about 6 months now, bought books and printed off about 200 pages of internet training tips. Alot of them contradict one another; one example is that some say use potty pads, some say do not because it encourages going in the house.

I am wondering if anybody could please give me some real tips that helped you in potty training, obedience training,… Continue

That dreaded appointment is tomorrow~It is a horrible feeling. I am trying only to focus on happy memories.


A memory that was happy was when Riley got attacked by a pitt bull! He was only two years old and was out in the front yard where there is no fence and a pittbull comes running from down the street. My mom is shouting to my dad for help! Riley just kept rolling over and running, finally my dad opened the front door and Riley ran in. Thank god he survived! He had a few… Continue

My Own MasterCard Commercial

Corgi Puppy: $500.00
Carpet Cleaner: $9.00
A pile of poop big enough to clear out a conference room full of people in mid-meeting: Priceless

First Trip To The Vet!

We have to take our other dog, Kujo, to the vet tomorrow for a good claw clipping. She has some disorder that causes the nerves to seperate from the outside cover. So, she has to go in for annual claw clippings. We've decided to take Jack to the vet as well. His first trip! He has to get a puppy check up and a couple of shots. I just know he's going to love it. :/

Does anyone have tips for helping him actually enjoy the visit? We love our vet, he's very… Continue

I wish I had gotten this on video tape. Today, we took Ofelia's Elizabethan collar off. We left it on the floor and forgot about it. A few minutes later, I walked into the other room. And I was just about to say how it was so weird to see her without the collar on, when she walked into my line of vision, and there she was with the collar back on. I laughed and said to Matt, "You put it back on?" And he said, "What do you mean?"
I said, "You put her collar back on," and I brought her into… Continue

I can barely see through the tears as I type. I have been looking at old photos and videos trying to cheer up. I haven't lost him yet, but the time is coming. We take him to the vet saturday and I know what he is going to recommend...Riley seems to be just so tired. He keeps staring off into space and doesn't know if he wants to sit or stand..He tries to follow me everywhere and I feel bad that he keeps getting up..I want him to relax. He decided to eat today so I gave him my sandwich. Whatever… Continue

Hi all. Well, my Roscoe just celebrated his 2nd birthday this past weekend! Because of his condition we were told not to expect him to live up to one year, and here we are into his second. I'm so hap…

Hi all. Well, my Roscoe just celebrated his 2nd birthday this past weekend! Because of his condition we were told not to expect him to live up to one year, and here we are into his second. I'm so happy. He still has his problems and we keep him pretty protected, but he's a happy little guy! Continue