I could really use some advise for a problem that Lucy is having. We spent two and a half hours in the emergency vet clinic this morning because she was vomiting. Total, she vomited 18 times in an hour and a half. This isn't the first time we've been to the vet for this, but this is the worst it's been. We have been to the vet five times in the last month and a half for diarrhea and vomiting and everytime we go in she's happy and energetic so the vet says she's "healthy diarrhea and healthy…

On the Other Side of the Door

I am certain that things are better on this side of the door--the healing side. Will I always stay on this side? Probably not. But I know it's here and I know how to get here. I'm sure I'll make trips back and forth through the door--at least for quite a while. I still tear-up when I think about Stinky Wink and how awfully quiet this house is during the day. He was such a wonderful friend and companion. The statue for his grave came yesterday. I have seen him sit that way so many, many…

I was out in the back yard yesterday afternoon, checking on the many flowers which have decided it is spring. I hope they don't get an unpleasant surprise. I also came across a couple of Stinky Wink's old toys. He had an odd habit. Very often--but not always--when I asked if he wanted to go outside, he would grab the closest toy he could find (or go hunting for one) and take it outside with us. Once outside, he would drop it in the grass. He never played with it, and I could never figure it…

Found a dead dog in our yard today :(

The following is a bit gruesome, so if you are sensitive to loss right now, perhaps you might want to skip this post....

So, I had just called in sick from work this morning with a cold when my phone rang.  Seemed strange at 7:30 am and I thought it might be work calling back for some reason, but it was my neighbor calling to say his wife had seen a dead dog at the bottom of our hill on her way out this morning.   They had seen the dog loose yesterday, but then…

On February 5th 2012 my mother & London's "grammy", Shirley Jean Kyler Siegfried passed away at the age of 65 at Penn State Hershey Medical Center, Hershey PA after a lifetime of suffering rheumatoid arthritis and twelve years fighting a mRSA staph infection.  Three days prior, on February 3rd, my partner Tracy's mother Faith Wittig passed away in hospice care at the age of 68 in a nursing home in Lebanon PA after a life of mental illness.…

This weekend, Baxter and I entered our first AKC Agility Trial. It was much larger than the UKC event we entered in November (our very first agility trial ever.) We entered Saturday and Sunday in Time to Beat (Sat only,) Jumpers with Weaves, and Standard.

Time to Beat (T2B) (no video) was the first run. I was really excited about this because I don't care if we get a T2B title. It seems like not all events have this one, so I thought it was be a good first run to get all the…

There is a rather long scar running down the center of my chest. It is a reminder of the heart surgery I had two years ago. Amazingly, I remember little of the surgery or the pain involved afterward, or during recovery. It's a reminder, but the negative aspects have faded. Instead, I remember that my life was saved; I remember the excellent care of doctors and nurses, the love of family and friends. I also have several small scars from gall bladder surgery last year. Though much less…

I don't understand why Pembrokes are ranked 27th most popular US breed and Cardigans 84th.   What's going on?  I think there should be a box to check on the tax returns, "Would you like a free Corgi as part of your tax refund?"  And Corgis got dissed pretty bad at Westminster.  What's up with that?

Update (Eighteen Days Worth, so it's Pretty Long:P)

Hey everyone! It's been a while since I've been able to sign onto MyCorgi, and it's been even longer since Ziggy has joined the family! I figured it was past due for an update! I wanted to do it more frequently, but things have been going a little crazy lately, and now is the time that I wound up having to be back here on MyCorgi:)
(Though I was on Facebook quite a lot--just that the hubsters wouldn't allow me on this particular site, because of some security stuff.. I was going nuts, I…

So yesterday was my human daughter's birthday. She had a dog-loving friend spend the night,and the fur kis spent the whole evening participating in the party in her room. I don't know what all treat they got last night, but this morning/afternoon, they apparently reached their limit. I gave the human girls chicken and French fries for lunch. They ate in the den....accompanied by the corgi girls. Many bites must have been shared because not too much later the fur kids were losing ALL of the food… Continue

The more I am on this site the more i get excited about getting a Pembroke Welsh Corgi for myself! I have to wait until I graduate High School however and that is a whole 3 and 1/2 years away ): I'm glad I am looking into the breed now though so I am fully prepared for all their little quirks. Some people may think I am crazy for already planning 3 years ahead for what kind of dog I want but my dad said that I could get one when I graduate. This is even more exciting for me. I want to be a…

I decided that I would write an obituary for Stinky Wink, just as I would for any family member. It has been a great healing activity. I thought I would share it.

Hugh Owen Morgan of Cardiff, better known as Morgan “Stinky Wink” was born 27 May 2000 on a farm near Raymond, Illinois, to AKC Pembroke Welsh Corgi parents. In August 2000, he came to live with his human parents, Randy and Arlis DeJaynes of  Decatur, Illinois, brought there…

I have finally gotten the gang all microchipped!  I had written a few months ago that I didn't think I could afford it as I thought there was an annual fee attached to each chip and with three dogs, it was too much for me to pay.  Thanks everyone for setting me straight.  Another big thanks needs to go to a friend who gave me a heads up to a daily deal site that offered half price on microchipping through the local ASPCA.  I was able to get vouchers for all three dogs to get chips for…

It's Been Two Months

Well, it's been a little over two months since I got my first corgi, Avery. My intention was to find the perfect little companion, who would go with me wherever I went - especially to the barn. 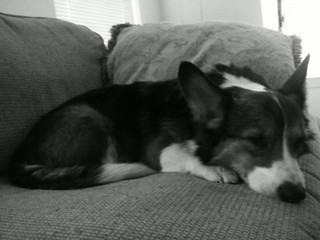 I'd have to say I ended up with everything I wanted, and then some! I'm finding it increasingly entertaining that, slowly but surely, I've noticed all of those…

We have lots of sunshine this morning, and that helps in the grief management process. The past several days have been dark, which really tends to add to a gloomy attitude. I'm beginning to remember our routines together with happiness rather than loss. Usually I drive our "walk route" at least once a day because it's the only way out of our neighborhood. For a long time it bothered me because "walkies" was one of our favorite times together. But last night my wife and I decided to go to DQ…

I think the ability to manage grief is very much connected to our ability to place situations in perspective. Last night I finally realized clearly that letting Stinky Wink go was not what was best for me, but for him. My reluctance to let him go was because I would be lonely. I would lose my best friend. I would hurt. But love can--and must--move beyond all those me-oriented feelings.When we can…

Remember the Malamute we were going to foster? Probably not as it has been a while since I have posted anything... Well my husband fell in love, and he became part of our pack.
Here's a pic of him when we first got him. Shaved and smelling of skunk, with a few Porcupine quill in his muzzle working themselves out. He was pretty ugly and stinky.… 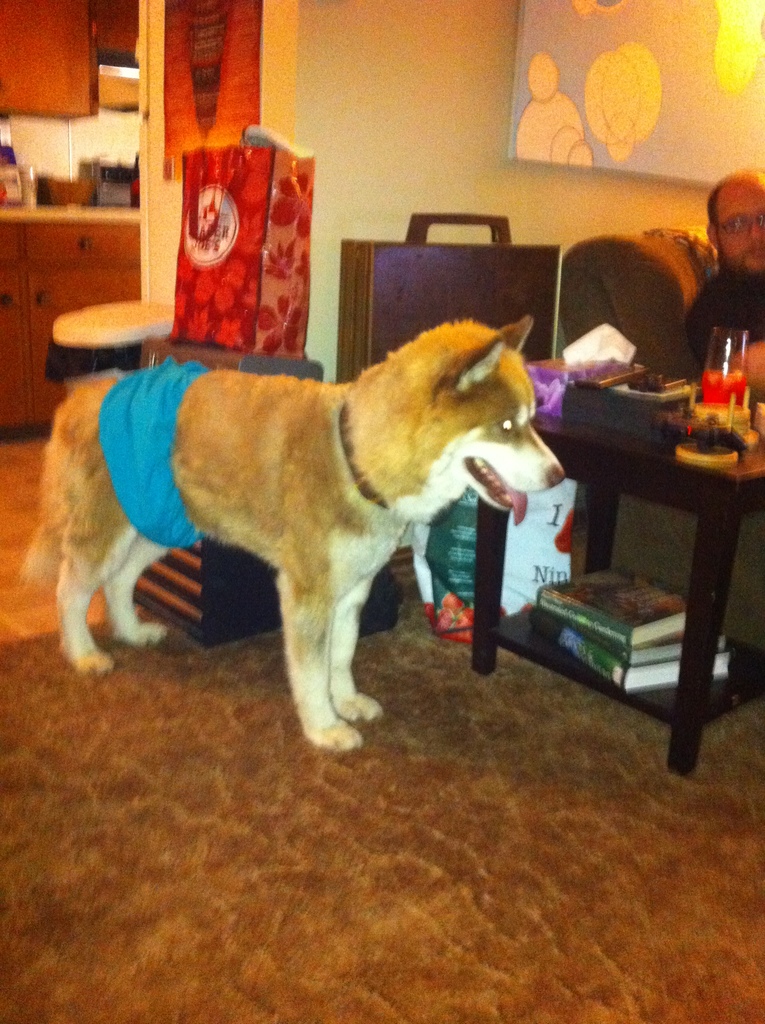 Yesterday was not a good day, mostly because a great number of things combined to throw me into a sort of funk and cause the managing of my grief to do a tail-spin. Wednesdays are my wife's long days. She goes directly from school to church, where she is the choir director and organist, and doesn't get home until about 8:45 p.m. My allergies and sinuses have been giving me fits, so the day started off badly. On those long Wednesdays, Wink and I conversed (well, I conversed and he listened)…

I was browsing Craigslist just now and saw that this adorable 6 month old Tri girl needs a new home because her family is moving to a new place that doesn't allow pets :|  here's the ad: http://houston.craigslist.org/for/2864154479.html

They are located in the Clear Lake/Webster area.  Thanks for looking :)

Lucy is 6 months old today! I can't believe the time has flown by so quickly from when I got her at 10 weeks. Her color is still changing and she is growing so fast. I can't wait to see how she grows in the next 6 months!!… 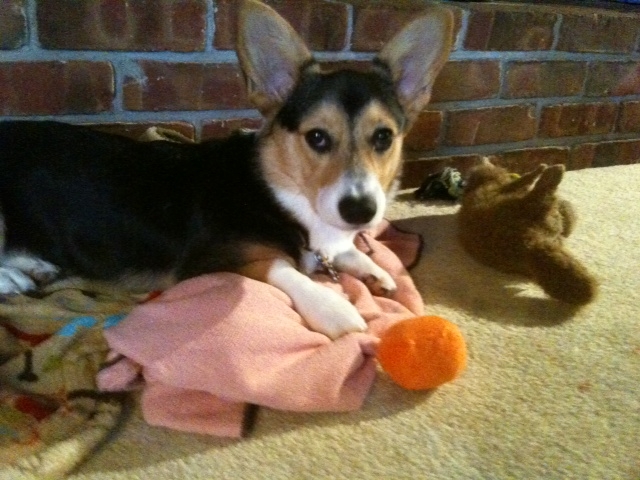 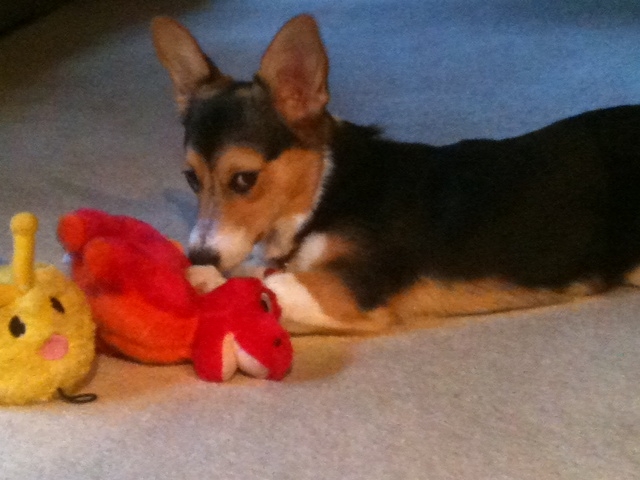