We got our second corgi!!

Just wanted to announce that we got our 2nd corgi!! Her name is Kai and shes a beautiful and sweet 4-month old tri-color. At first when we brought her home we thought uh oh, what are we getting ourselves into?? We had forgotten how much work it took to get Keahi trained. However, only after a few days, Kai got comfortable and settled in. In less than a month (we picked her up July 4th weekend), shes potty trained and knows all the tricks Keahi does. It might be a stretch… Continue

Clicker training and the Park

Didi and I have been trying out clicker training, (As per Sylvia & Timmy's advice) and it's been going very well. It's nice to be able to have her know exactly what she's being rewarded for. It can be find of difficult to get her to figure out if she's being rewarded for sitting,, looking at me, or just getting cookies because mommy likes her. Now she knows that clicker means "correct!" and she's a lot less confused. Before when she got confused she'd just start going through different… Continue

Fat Dog on a Little Bed!

First, big thanks to Cheryl for coming to visit yesterday. Her visit was enough excitement that the dogs didn't need their evening walk! HA! Sometime last night, I woke up to get some water and I found Tigger curled up in the too small cat bed. My 30lb corgi looked embarrassed to be seen trying to curl up in a a bed made for a 10lb cat! Tigger is feeling much better thanks to the pain meds. He's on restricted exercise, but he hasn't felt like doing much until this morning. I made the mistake of… Continue

Well the couch issue is turning out pretty well. My funny pup has decided it futile to jump on my couch because he gets put right back on the floor, or worse, in his kennel. He does do it when he is extremely excited however. Here is my current issue, and I would be deeply resolved if I could solve just one of these.

He chews his butt, well, not his butt but the hair on the back of his legs that resembles butt-cheeks. He seems to be starting to become obsessed with it. He is not… Continue

Hilarious.. to me.. not to Matt.. and only half Owen

So we went on a great walk today because someone had a rediculous amount of energy. I find he really likes to bark alot between 6-7pm. Amazing sense of timing he has. So we went for our walk and ran - I love that Owen walks normal and then when he breaks into a run that his hind legs move together (like a bunny).

It rained today so Owen took it upon himself to jump into a couple of puddles because that's tons of fun. So Owen needed a bath. We really had to work together on this one… Continue

Didi's only 9 months old, but she's gotten intolerant of male puppies. She's ok (if a little timid) around most dogs at the dog part; she loves white pitbulls and boston terriers, but there's something about male puppies that makes her really scared. She tucks her butt in and tries to get away from them and finally, if they don't leave her around, she stripes, snarls and barks at them. (She has a really shrill, girly bark.)
I'm not sure if I should try to stop this, or if I should let her… Continue

Played in the river today.

Well, this is my first post. I guess the only thing to share is that Belle and I went down to the river today and she loved it because it was very hot out today. She played and ran around on the shore and rolled in the sand. It was very cute.

She said Corgi and that got my attention.

For starters, I want to say "hi" to all of my new myspace friends! Obviously you came to my page because you are animal lovers too, like me.

So I just wanted to say "hello" and that I am happy you joined me here! :-)

I also am sending out this bulletin because I really need everyone's help. As many of you know, about a year ago, I started "New Dawn Pet Rescue". Through New Dawn, I go to the Los Angeles city animal shelters, and I rescue dogs that… Continue

That's it! Lola is officially smarter than me!

I don't know when this started but Lola has somehow learned that she can trick me. First off let me just tell you that she can't go down the stairs, she can only go up. So today I was in the living room and she decided she wanted to go upstairs. She sat at the top of the stairs crying like a baby until I went up to get her. She had "crazy eyes" and ran alllllllllll the way down the hall and hid under the blankets in my bed. So I thought it was weird, went and grabbed her and brought her down.… Continue

An interesting thing happened to us when I brought Camber to the groomers to have her nails trimmed and she totally freaked out. It was out of her character, all that twisting around trying to get away. The groomer had to put a muzzle on her. She's never had a muzzle on since we got her and it was distressing. Too much drama for a Monday!

I have discovered that a local pet store in Portland (Planet Dog) does something called Puppy Romper Room for an hour a day on Saturday and Sunday. This is really great because I was kind of at a loss for ideas on how to socialize Penny. I don't know anyone in the area with dogs, and whenever we've gone to the park and tried to meet dogs there, Penny is very shy. Well, honestly, almost terrified. I'm pretty sure this must be because of the incident with Comet (my out-of-state friends… Continue

Whenever someone comes to the door, she gets to sit by the pillar in the foyer. She doesn't like this at all. She tries to look away from me and creep towards the door (and the people coming through it) like I don't see her. Or she army crawls toward the door, with her feet on the rug she's supposed to be at, like she's trying to steal home or something.
On the bright side, now when the doorbell rings, she runs… Continue

Tig got his his first Imminicide treatment on Friday. I couldn't look while they gave him the shot. Within 45 minutes of receiving the shot, he started feeling bad, mainly muscle soreness. Beyond that and the lethargy, he is doing well. He's doing a good job of restraining himself when it comes to exercise. I do reward him with a short, quiet walk down to the corner of our block, but you can tell he's in a lot of pain. I've asked my vet for some pain meds and a friend of mine is a Healing Touch… Continue

So yesterday I was talking to my husband about how Puki was recovering so well, until this morning I took her out of her cage and she started to pop a squat right there in front of me, she is def. potty trained so I figured that since she was still young that it was a random mishap. But then I looked closely at the puddle on the carpet and noticed there were tiny droplets of blood by it! I was like, oh no it it her incisions? Maybe they opened up? Well I turned her over and saw that her… Continue

Secondly, OMFG* he takes it out of you! I feel tired constantly but I am happy at the same time. Strange...

Bringing him home was easy. Banzai slept through the later half of our trip. But he was thirsty and wanting something to chew on at first. He loves his PetStages teething stick, I think it is his favorite toy. Well next to the small Bobo toy.

Banzai is so well behaved, I was worried… Continue

Sandy is a 6 year old female and has experienced a barrage of medical problems in the last two years. She herniated two disks in her back and had back surgery a little over 1 year ago. Luckily she recovered and is doing well although she has lingering nerve damage in one rear leg. Since her surgery, she has 5 urinary track infections. Her most recent diagnosis was this past Friday. It seems that she cannot go 3-4 months without experiencing a UTI. In two weeks (after the antibiotic course) we… Continue

Didi is getting spoiled today because Petco has this sale where if you buy a 6-10lb bag of Wellness, you get 4 free cans of dogfood. Today Venison and Sweet Potato is mixed in with her delicious foods.
Needless to say, today we did not have any issues with getting her to eat dinner. She wolfed it down like nobody's business, and was even polite enough to give a belch afterwards. Don't eat so fast puppet.
I took her to the dogpark today but it was way too hot so no one showed up. We… Continue

Bold Corgi - Does everything HAVE to go in his mouth?

Well Owen is getting bolder and bolder every day. We noticed that we now have to use the leash every time we are outside because he is getting fast! We have shared yard with our neighbors (both houses belong to our church and we are pastors) and if they are outside with their kids (2 and 9months) Owen stops listening and we are no longer the coolest thing in his world.

He also is quick to pick up one of his favorite yard "land mines" (as we call them) meaning: pieces of bark, sticks… Continue 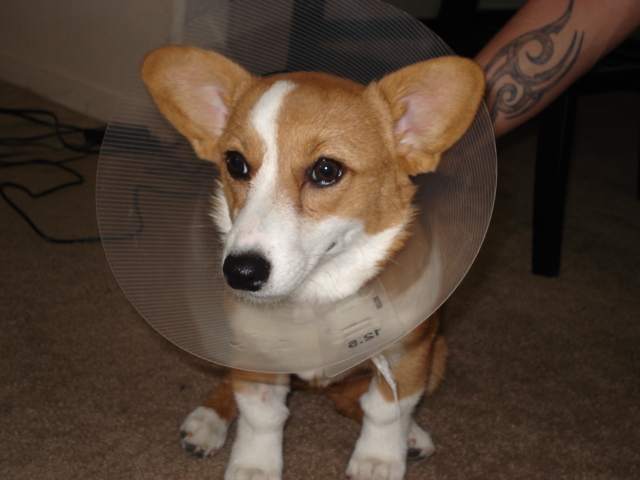 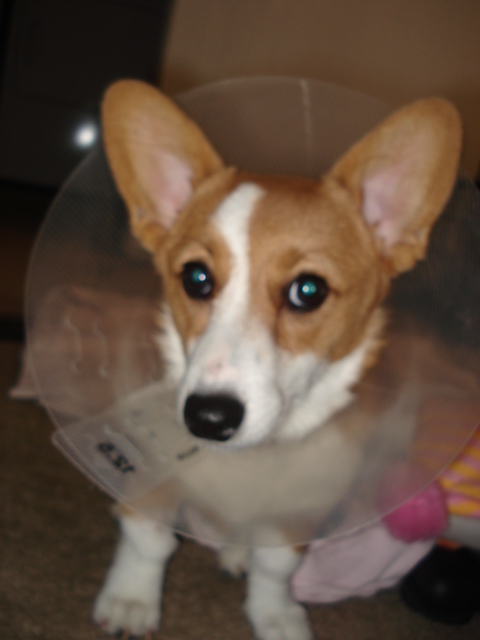 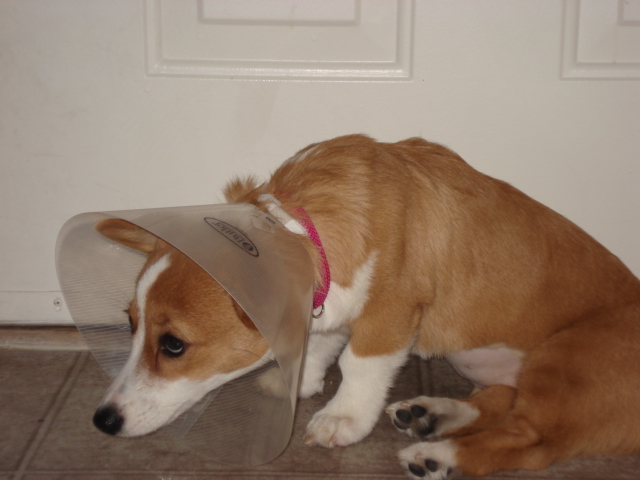 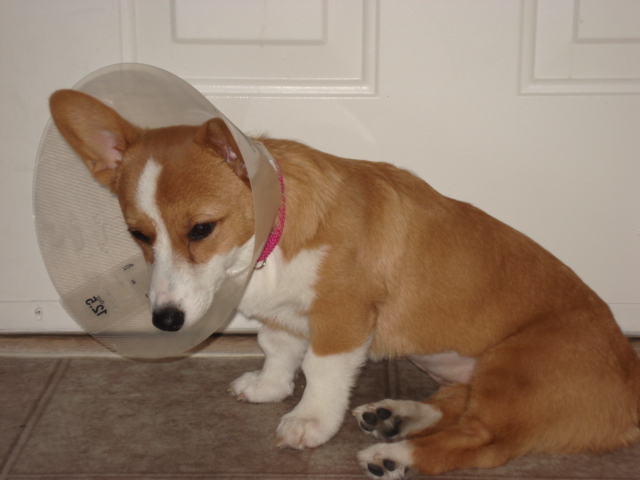 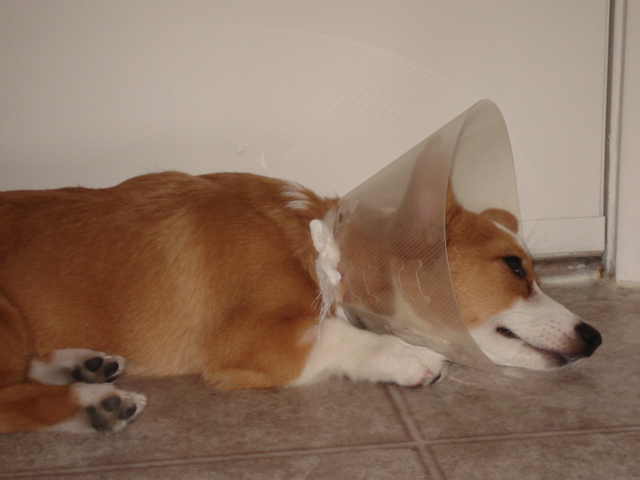 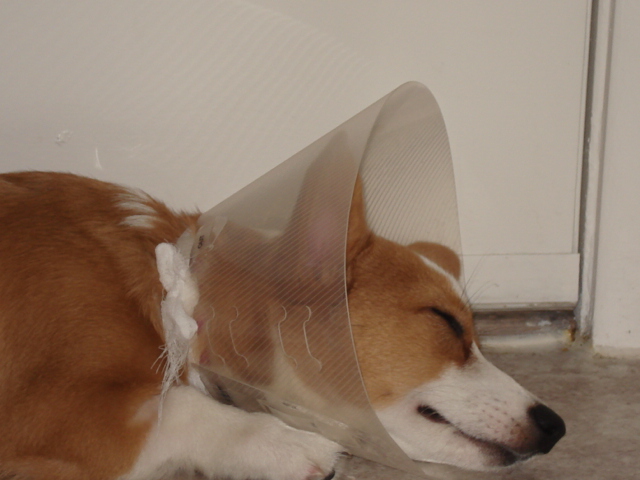 So Puki got spayed this morning....poor little thing, hates the cone around her head! I can only imagine how it feels to wake and have some giant plastic cone around my head! The surgery went fine and her blood work showed she… Continue

Activities for corgies in Central Texas

I don't know of any activities or get togethers for corgies in central Texas. I love doing stuff with my dogs but I am running out of things to explore. And I would love to know if there and any special places or activites that I don't know about for corgies or just dogs in general. So if anyone has anything they would like to share I would greatly apperciate it and so would Eva and Ein. :P