I wonder what our corgs would say.

"It is called a tail momma not a stub or nub."

"My legs are the size they should be, not short and don't call me stubbikins!"

A few days ago Roslyn wa

s playing with Oona and let out a huge yelp and hid. I checked her out thinking she probably got snagged by a tooth or something, but didn't find any marks. Since then she had been limping a bit, and very snippy with the other dogs. She has been super clingy to me and distant to everyone else.
I figured she had pulled a muscle or something as there was nothing external and she wasn't having any other symptoms beside being grumpy and clingy.
This…

I am so excited, guess why??  Tucker and Lance showed signs of playing today, which hasn't happened much lately, last time I got them on video playing was in Michigan in July for a short time.  Today, Lance started out licking Tuckers ears and Tucker was gently sniffing Lances ears, no licking though.  They then started playing, Tucker going at Lances ears, which made me nervous, but Lance was letting him, so I let him handle it and he did fine.  It is almost as if Tucker knew to be gentle…

And what a year it was! I am so in love with this little doggy! She truly is our "first born!" Ha!

I remember when we found out about her hopping and we were trying to decide if we wanted to bring her home. We didn't have to think too long and decided to bring home a dog with a "disability." Now, I often wonder what her life would be like if we hadn't taken her - or if she would be alive. But the better question is what would our lives be without HER!…

does anyone else have a corgi that HATES water? Meeko just simply hates it, he refuses to go outside when its raining will not go swiming when me and my boyfriend do and looks like he is being punished when getting a bath? I thought for the most part all dogs loved water? When I brought him home at 9 weeks he would always stick his foot in the water bowl when he drank but he doesnt even do that anymore. He is licking himself dry at the moment because I wouldnt let him in till he pottied(… 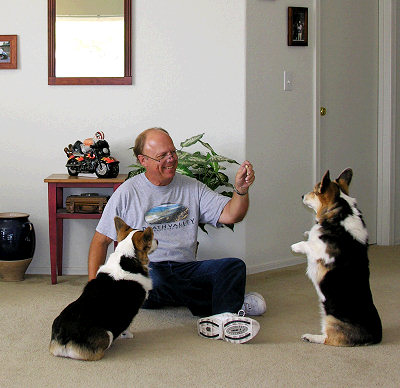 About a year ago I got to looking though all…

Yeah!!  After sending a few pictures to The Bark, one was selected of their "The Smiling Dogs, Weekly Smilers" webpage!  Bento's picture is a part of their slide show, and it's on the second slide (click the right arrow button).

I saw this coming from a mile away.

I was supposed to welcome Ace on the 31st of August. Now it looks like I'll have to sit tight and wait until the 3rd of September, and not for any other reason than the fact that the vet offices filled out the forms in black, not blue, ink. If there were ever any reason to hate the bureaucratic red tape and paperwork hellishness of importing a dog, it's this one.

I don't even know why it needs to be in blue ink. For other zones, blue is preferred, but they'll take…

I am finding in my roamings that many people are under the impression that shortness is a disability.    I need some witty come backs to set the public misconception about corgis straight.

Yes, my corgi can make it to the top.  I bring him because my husband can't(words out of his mouth) or won't.

Yes, my corgi did make it all the way…

How Much Do You Feed a 6 Month Old Corgi?

Bartleby is getting bigger and longer, but sometimes I worry he is too "skinny". When he stretches out, I can see his ribs, and I'm worried that what I'm feeding him isn't adequate. I've been really focused on keeping him not obese and worried its a little too much in the other direction. I think he's going to probably be a pretty big corgi when full grown, based off his size now compared to adults I've seen and how big his dad was. How much did you feed or should you feed your corgi at 6… Continue

We brought our first Cardigan, Cooper, home one week ago. He is now 9 weeks old. He is such a sweet, happy little puppy and looking into his pretty blue eyes just melts your heart. But… we are having some problems.
Cooper screams all night in his crate. Not just barking or whining – his is screaming. I imagine he does this when he is in the crate during the daytime too. We have tried everything I can think of. We tried a soft crate right next to my side of the bed with the opening on…

Corgi Needs Your Help Finding Family She was Taken From -

Zoey's family needs all the help they can get. I cannot image my little guy getting snatch. I feel compelled to try and do something.

Please please please lets not forget and if ALL of us send these links, fliers to Facebook, Twitters, Blog sites, etc., there is a strong possibility a friend, relative, neighbor will see it…

Well....Ms. Pippa ("Pip") joined my family yesterday. She is a Corgi/mix rescue found in Fort Worth. She mostly definitely was someones pet. She is well mannered, house trained, knows how to come and go out of the dog door and sits, lays, etc on command! She is half Cash's size and only weighs 20 lbs. They say she is about a year old and is a fiesty little thing. She is alreay running the house in less than 24 hours!!  Thinking of renaming her. Any suggestions??

Queen Elizabeth's Corgi news - anyone else see this?!

Apparently the Queen found out that her beloved Corgi's were getting reheated frozen meals instead of freshly-prepared ones.

﻿In case link doesn't work - ﻿﻿go to news.yahoo.com and search for "corgi" in the news section. I do this occasionally to find interesting stuff…

Well...I thought I'd get a corgi this year...but another year goes by, I still have no place and am getting no corgi from my boyfriend this year. This birthday so far really sucks, I can't even see my boyfriend for my birthday. I got a nice necklace as a birthday/anniversary present....Its lovely but I still find myself depressed....22 on Tuesday, all alone.....time to look at corgi pictures.

It was corgi day at Balboa Park yesterday! We're in a heat wave (90 degree temps) but despite the heat we had a wonderful time!

First we spent about 40 minutes playing in a big beautiful fenced park: 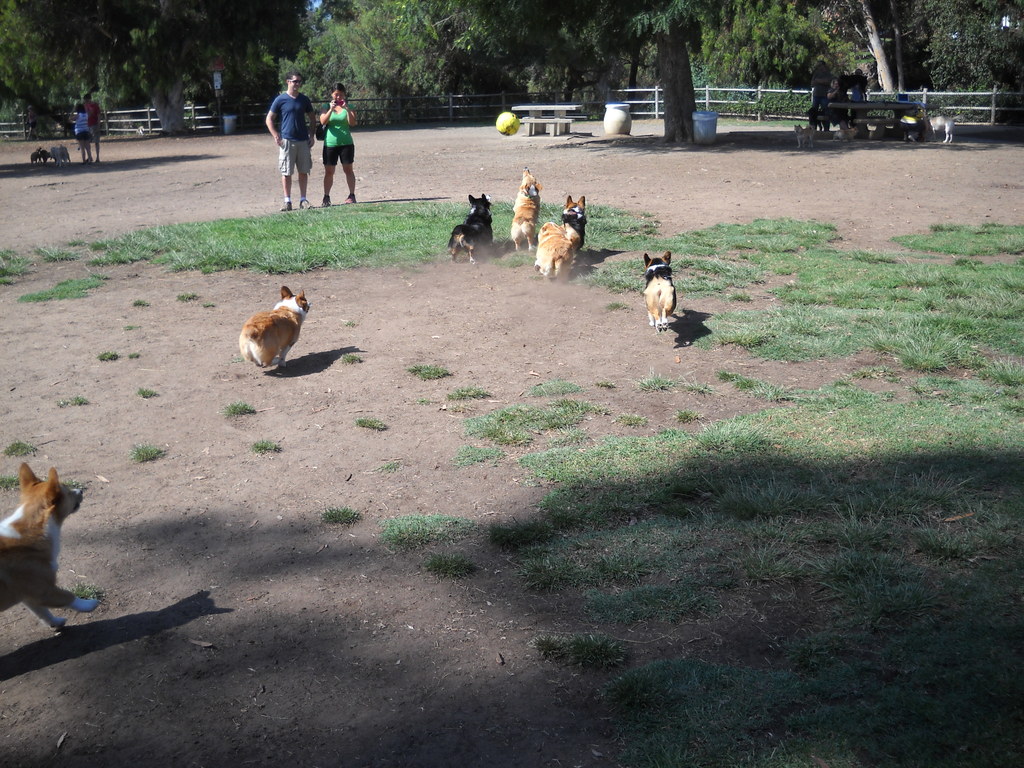 they had a blast chasing that yellow soccer ball around! 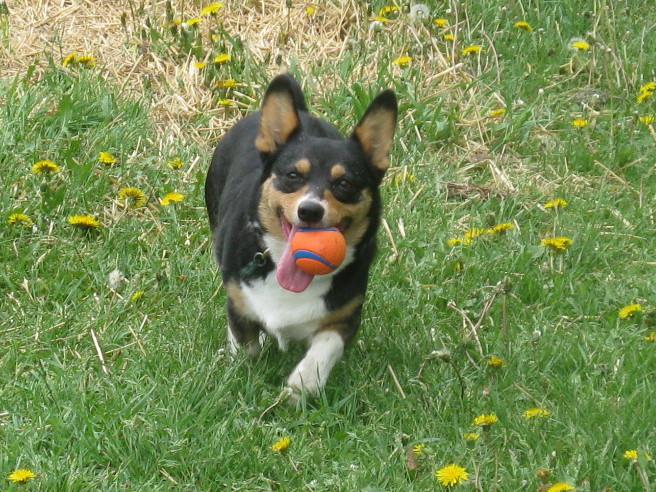 I spent 3 hours yesterday looking for Livvy. Now, she never leaves the yard and can be trusted to stay home! Well, I couldn't find her and thought the worst so I walked in the fields,drove all over and squeaked her favorite toys plus played ball with the others to get her to "come". Right before I left again I laid her 2 balls on the deck after playing catch with…

Just wanted to say "Stay safe" to all our East Coast corgis and their families!! Hopefully Hurricane Irene will leave without too much damage! 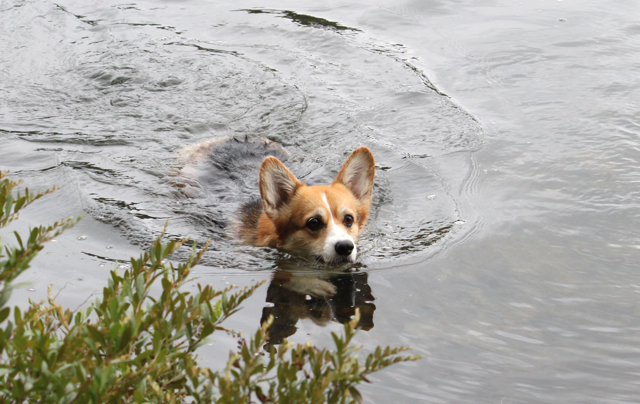 It's not been a great summer for dog outings.  It's been very rainy here in Pennsylvania, and when it's not muddy it's hot.  For the first time in too long, we took the dogs hiking today.

We found a very nice wooded trail near a reservoir.